A Japanese supercomputer is now the world’s fastest, unseating the previous record-holder by nearly a factor of four. The K... 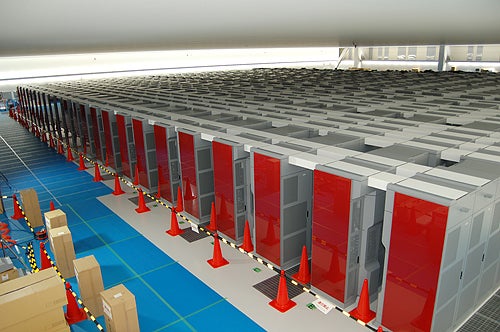 A Japanese supercomputer is now the world’s fastest, unseating the previous record-holder by nearly a factor of four. The K Computer, based at the RIKEN Advanced Institute for Computational Science (AICS) in Kobe, can perform 8 petaflops — that’s 8 quadrillion calculations per second.

The next-best computer is China’s Tianhe-1A , which set a record at 2.6 petaflops last fall. The U.S.-based Jaguar computer at Oak Ridge National Laboratory is now in third place with 1.75 petaflops.

K Computer, built by Fujitsu and entirely made in Japan, has 672 racks equipped with a current total of 68,544 SPARC64 VIIIfx CPUs, each with eight cores. It will eventually have 800 racks and will be capable of performing 10 petaflops, according to a news release from RIKEN. RIKEN and Fujitsu plan to have the computer fully operational by November 2012.

At least two American 10-petaflop machines are set to come online next year — IBM is building Mira, based at Argonne National Laboratory, and Blue Waters, based at the University of Illinois at Urbana-Champaign’s National Center for Supercomputing Applications. Lawrence Livermore National Laboratory is getting a 20-petaflop IBM model called Sequoia.

K computer will be used for global climate research, meteorology, disaster prevention, and medicine, according to RIKEN.