iGrill Review: The Bluetooth Meat Thermometer For Your iPhone

Is the humble meat thermometer the next in a long line of gadgets made obsolete by an iPhone app? 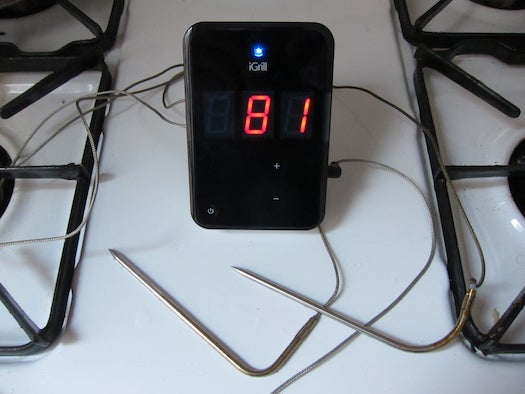 As we approach Memorial Day, I can think of few things sadder in the summertime than overdone meat. There are a number of tools and methods to combat such tragedies, but perhaps most novel among these lately is the iGrill–a dual-probe meat thermometer that pairs with a companion iPhone or iPad app via Bluetooth. With an accurate temperature readout in your pocket, you’re free to go about your business, checking the temperature occasionally and getting a buzz when your meat reaches a set temperature of your choosing. That’s the idea, anyway.

As far as we know, this is the first iPhone-compatible meat thermometer.

The iGrill will look snazzy on your counter. Its thermo-probe seems to be accurate (I measured it against my inexpensive non-connected meat thermometer to comparable results). The pairing process is relatively simple–after you pair the iGrill under the iPhone’s standard Bluetooth settings, it should auto-connect when Bluetooth is enabled on both devices. I didn’t put the range to a serious test, but it stayed connected throughout my 1-bedroom apartment and into the foyer. The iGrill site promises a range of over 200 feet, but I didn’t test the full extent of that range.

On the surface, the companion app is really nice. It allows you to set a “done” temperature alarm for each probe, shows you the current temperature and a nice trend graph for a look at how things are progressing, and tries to give you a best guess on the time remaining to reach your set temperature. A swipe to the side gives you a faux-analog readout of the same temperature, and an additional manual timer from one to 60 minutes. I was puzzled as to why they’d build in a timer when the iPhone’s Clock app has one already, but then I discovered why… 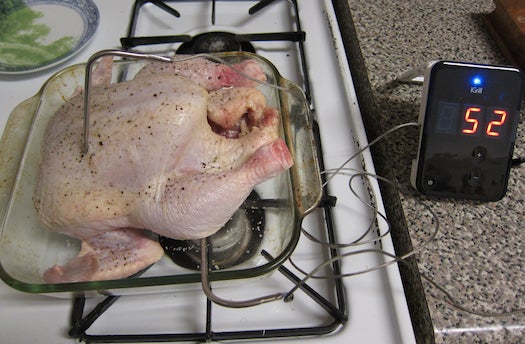 Unfortunately, there is a critical fail point in the iGrill system that can put your meat at serious risk. And with a succulent ten-pound fresh ham on the line, that’s not a chance I’m willing to take.

First and most glaring is that the iPhone companion app does not support background multitasking. Which means when you switch to another app, your temperature alarms will not sound. So much for going about your business without a care. Thankfully, this could easily be fixed if the folks behind the iGrill were to simply update the app to support background notifications. But the iGrill’s been out for several months now, and it’s still without this critical update.

When you switch to another app, you also lose the trend line data from one of your two probes, for whatever reason. Not critical, but kind of annoying if you were using the trend line to get an idea for when your meat will be done (the auto-estimation of this is not reliable and fluctuates wildly). 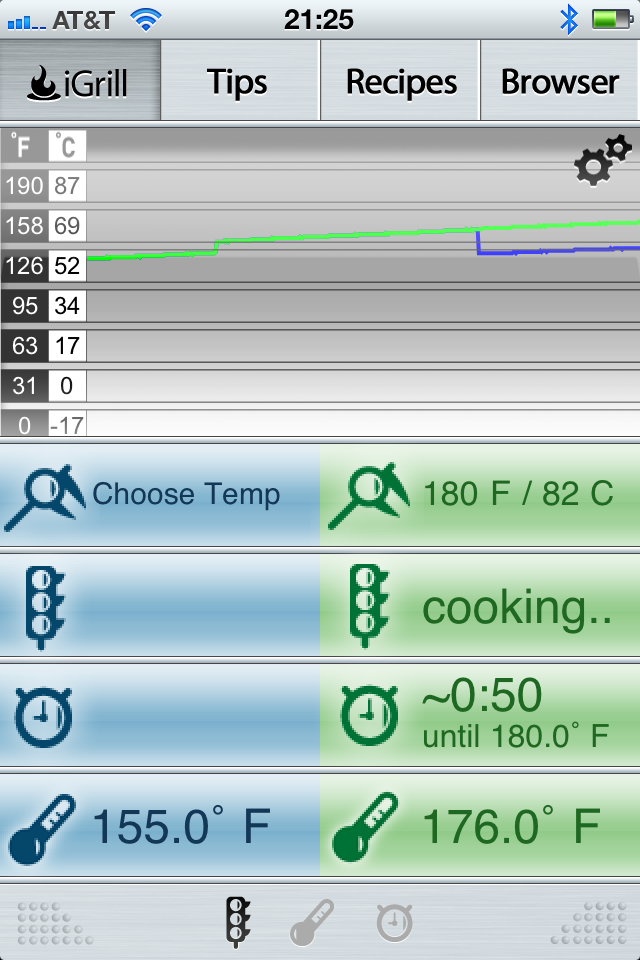 In the event that you’ve switched to another app, the iGrill transmitter will still issue an alarm beep from your counter, but it’s incredibly quiet (and does not have a volume control). Unless you stick close to the kitchen, you might not hear it until it’s too late.

And generally speaking, the iGrill doesn’t present much advantage over significantly cheaper wireless probes that don’t pair with your phone. If the app could log a history of temperature progression graphs for various grill session that you could reference later, that would add something nice. But again, no background multitasking prevents a feature like this.

Additionally, the first review unit we received had a lot of problems staying paired with my iPhone and iPad. It was then swapped out for a non-defective model that worked as expected, but keep an eye on this if you’re having Bluetooth connection problems.

$100 for a single-probe model. $115 gets you a second probe to simultaneously track two temperatures (the probes are sold separately for $20). The accompanying app is a free iTunes download.

If you don’t mind leaving the iGrill app on your phone open during the entire cooking process, then the iGrill is a fun, expensive way to impress your grilling buddies and keep tabs on your meat. But for me, no background notifications is a dealbreaker, especially at a price of $115 for two probes. For a quarter of that price, you can get a good dual-probe thermometer with a small wireless pocket transceiver good for up to 75 feet.

The iPhone has made a lot of gadgets obsolete, but don’t count “meat thermometer” among those just yet. If iGrill updates their app to monitor temperatures in the background and log some data, though, it could be a more feasible purchase. But still at a high price premium over non-iPhone thermometers.