A weirdly shaped grill with a battery-powered automatic rotisserie 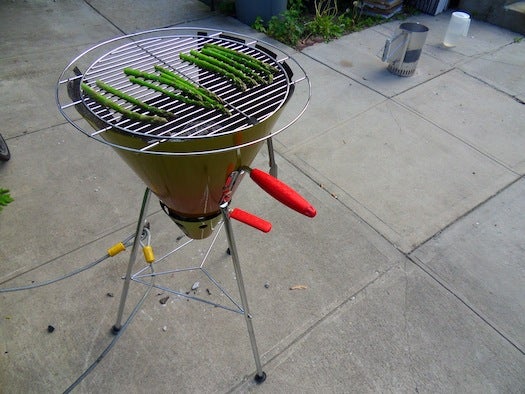 Congratulations to everyone who lives in dumb weather areas (New York really got punched in the balls with winter this year) for making it to summer! In true patriotic fashion, the onset of summer also means the beginning of grill season, so we decided to find ourselves an unusual grill and see what it’s got. That grill: the Bodum Fyrkat Cone Grill, a peculiarly shaped, smallish charcoal grill with a battery-powered automatic spit for rotisserie-ing.

The grill, shaped something like a giant enameled ice-cream cone (and, in its green version, colored the precise shade of a pimento-stuffed martini olive, red accents and all), is designed for smaller spaces–more an apartment grill than a big backyard barbecue party machine. Inside, from the bottom up: It’s got a fitted but removable ash-catcher at the bottom, then the area that holds the charcoal, then two levels for grilling. Both levels are removable, either for cleaning or to make room for the rotisserie spit.

That’s right, this little grill (only 14.6 inches in diameter at its biggest) has a battery-powered rotisserie spit–just skewer the item to be rotisserie-d, insert into the battery-holding handle, and flip a switch to make it spin slowly and enticingly in either direction.

The grill really is a nice size for apartment-dwellers, and the long spindly legs lift the surface up to the proper height for cooking–much easier to use than those low-slung Weber grills. The ash-catcher is great; just twist the handle and the little cup of ashes comes out, nice and neat. I like the two levels for grilling–you can have some vegetables slowly cooking or bread slowly toasting on the top level, and then get a nice hard sear on your meat or fish on the bottom level. (There’s a nice cut-out so you can retrieve or manipulate food on the lower level without moving the top level.)

The design is definitely an eye-catcher. Just about every neighbor I have, many of whom I’d never met before, has spoken to me about “that weird grill.” It’s very Bodum-looking: Bright enameled colors (red, green, orange, and, well, black), cheerful red rubber handles, and the odd shape all give it a playful, modern look.

The rotisserie kind of sucks! Bodum doesn’t include a battery (it takes one D battery), which wouldn’t be that big of a deal if the directions were at all clear about what kind of battery to buy. (The directions are mostly not helpful while assembling the grill, but it’s not hard to put together, even for someone whose entire tool kit consists of one screwdriver and a hammer found in his parents’ basement). I attempted to rotisserie a 4.4-lb whole chicken, which is really only a moderately sized bird, but the rotisserie freaked out like I was trying to spit-roast an emu. The battery-powered handle made these awful protestation noises, like it was never sure it would be able to complete the next rotation. It did work, after some minor weight adjustments to make the chicken more evenly impaled, but I still wasn’t able to complete the 90-minute spit-roasted poultry dish.

That’s because the grill is tiny, and the coals are placed far too high, compared to the location of the chicken on the spit, for a bird of that size to roast properly. In fact, the coals were too high to prevent the chicken from catching completely on fire every fifteen seconds. It kind of defeats the purpose of a supposedly convenient automatic spit when your dinner’s constantly turning into a flaming poultry torch (“FIRE CHICKEN! FIRE CHICKEN!”). The rotisserie part of the grill was a total disappointment.

The design of the grill itself is a liability as well, from a heat-retention standpoint. The wide, flat bottom of the classic Weber grill isn’t for looks–it’s because that shape is the best way to retain an even distribution and consistent temperature of coals for as long as possible. The Fyrkat’s conical shape is cool to look at, but concentrated heat very intensely in the center of the grill, leaving the surrounding areas cold. It also only holds a small amount of charcoal, and for longer grill sessions, I found myself having to refill it more than I would with a Weber. For quick, single-dish grilling, that’s not a problem, but every once in awhile you want to grill enough food for more than two people at once, you know? The Fyrkat also glowed red through the green enamel paint when in use, which you can see in these pictures–not necessarily a problem, but sort of alarming.

Also, it doesn’t come with a lid. What?

About $150 from Amazon, almost five times more than a similarly-sized Weber 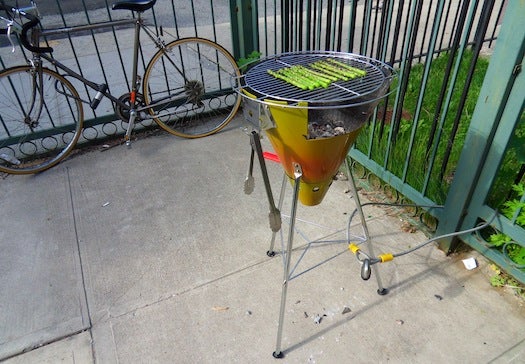 Bodum Fyrkat Grill, From Side

Here you can see the opening for the lower level grill, though I had removed it at the time

I love this grill in theory. For urban dwellers, it’s nicely flexible, with its two levels and rotisserie spit, and the ash catcher makes cleanup really easy. But it is egregiously overpriced, and the spit is pretty much useless for anything you’d want to rotisserie (I’m sure you could put vegetables or small bits of meat on it, but what’s the advantage of that over a wooden skewer?). If the price was maybe half of its $150 asking price on Amazon, it’d definitely be something to consider for apartment folk. As it stands, I have a hard time recommending it over a $34 Weber that probably does a better job at actually, you know, grilling food.