Camera-stabilizing tech now takes a load off the everyman 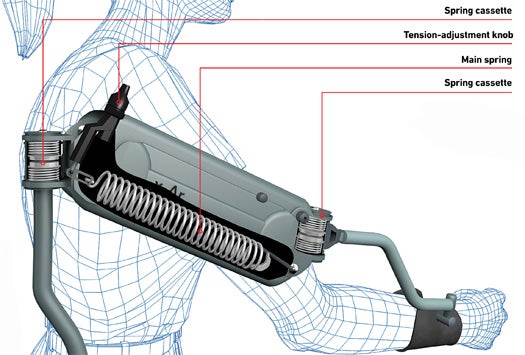 The Steadicam was originally developed to take the shake out of Hollywood chase scenes. Now a California company, Equipois, has given it a new purpose: to help line workers and file clerks. The x-Ar arm reimagines a Steadicam’s spring system to make arms and tools feel weightless, diminishing the risk of repetitive-stress injuries without motors, batteries or external power.

Steadicams hold cameras at the end of two joined, spring-loaded arms that move in tandem to counteract cinematographers’ steps. The x-Ar packs a lighter, more compact version of the Steadicam mechanics into one arm-gripping housing. The bulk of the load is borne by a 50-pound spring. As the wearer moves, spring-loaded cassettes at the ends of the housing flex and release to assist the lift from side to side. Workers get up to 10 pounds of strength (the average arm weighs seven to 10 pounds).

Though the x-Ar is designed for office tedium, Equipois sees future versions on dentists’ chairs and operating tables, where precision is crucial.