Today at the CTIA conference in Orlando, HTC and Sprint announced the new HTC Evo 3D, which will be one... 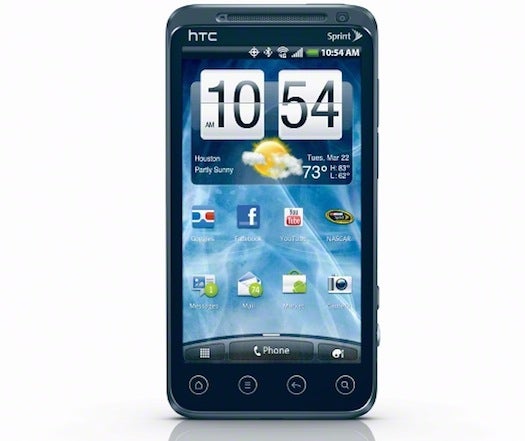 Today at the CTIA conference in Orlando, HTC and Sprint announced the new HTC Evo 3D, which will be one of the first 3-D-capable smartphones in the country, just following the LG Thrill 4G on AT&T. These phones are both big, powerful Android phones, with an interesting twist of glasses-free 3-D displays.

The Evo 3D, in some ways the follow-up to the Evo 4G, boasts a dual-core 1.2GHz processor, WiMax (4G) compatibility, and 1GB of memory, as well as Android 2.3 “Gingerbread,” the newest and surprisingly rare version of Android. But what we’re really interested in is the screen, an impressive 4.3-inch “QHD” screen with a 960 x 540 resolution, a much-needed and substantial bump from HTC’s previous phones of the same size. The screen is an auto-stereoscopic display with a parallax barrier–similar to the Nintendo 3DS, it relies on the viewer being at a particular distance from the screen, but does seem to work fairly well at creating a mild illusion of depth. You can read more about how this kind of 3-D works in our explainer.

Both the Evo 3D and the Thrill 4G boast dual cameras so you can shoot photos and videos in 3-D. HTC claims that the Evo will be able to shoot 720p video in 2-D, and 1080p in 3-D, which is pretty impressive, supposing the image quality is good.

The LG Thrill 4G is a rebadged LG Optimus 3D, which I got a chance to play with at CES this past January. It is, we should add, an HSPA+ device and not a true 4G device–HSPA+ is AT&T’s boondoggly, theoretically bumped-up 3G network, but in our tests we found it actually slower than 3G. That makes the Evo 3D much more exciting; after all, WiMax legitimately is far faster than traditional 3G. That being said, the Thrill seems like a pretty nice phone, fairly similar to the Evo with its 4.3-inch screen and dual-core processor.