Never look down at your GPS again; instead, glance at a dashboard inside your goggles. Recon Instruments’s second-gen micro computer... 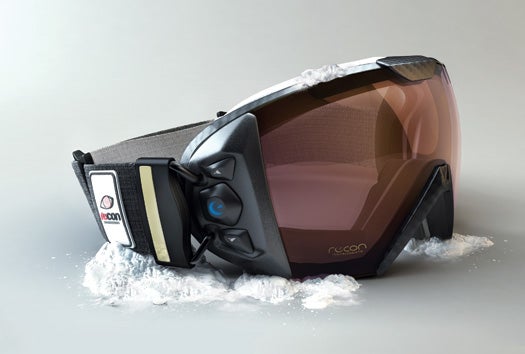 Never look down at your GPS again; instead, glance at a dashboard inside your goggles. Recon Instruments’s second-gen micro computer snaps into goggles and shows vitals—directions, text messages, nearby friends—on an internal display.

The actual picture comes from a 0.3-inch LCD tucked above your right cheekbone, but the image you see is magnified and projected through a prism. (It looks like a foot-wide sign about five feet ahead of you to the right.) The computer feeds data to the display from its own tools—including a GPS radio, three accelerometers and a thermometer—and from a Bluetooth-connected cellphone or helmet camera. Skiers toggle among screens using buttons on an included watch or gloves to see anything from climate info to live video.

Since the computer runs on the Android smartphone OS, developers can code new apps, such as avalanche alerts and scavenger-hunt games. For now, Recon’s system is only in goggles, but the company is also working on sunglasses and motocross helmets.