Missing the fairway is inexcusable now 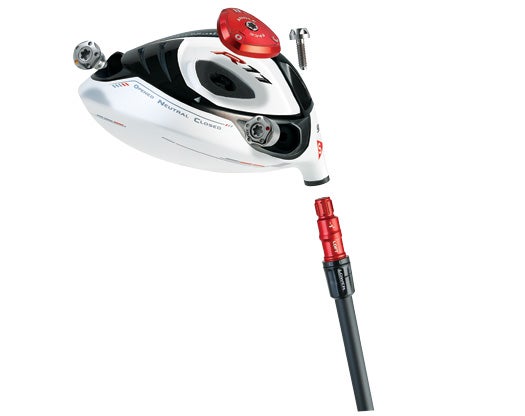 For decades, pro golfers have customized their clubs to help them straighten shots. TaylorMade’s new R11 driver lets amateurs tweak their club in seconds and more accurately adjust shots than with previous models. the company’s last driver had a moveable shaft to increase loft; each half-degree shift, though, also rotated the face in two-degree chunks, which could send drives adrift. The R11 adds an extra layer of adjustability, so golfers can change both loft and direction for the first time, saving amateurs from the tactics pros have used in the past, such as bending the head-shaft joint with blowtorches.

Three Steps To a Custom Club

The player can control the launch angle by tilting the R11 forward or back. To do this, the shaft pulls away from the head and the player rotates it to one of eight stops to raise or lower the ball’s initial angle.

So that golfers can adapt to shaft-angle tweaks, TaylorMade found a way to control how the face angles, even when the loft is changed. A tapered aluminum plate on the bottom spins to one of three positions, each shaped to set the club at a specific angle.

Adding weight lets players curve shots on fairways (or compensate for bad driving habits). A 10-gram screw inserted into the heel sends shots a few yards to the left, while one placed in the toe helps the ball fly straighter.