Verizon’s 4G Phones, Tablets, and Dongles: How You’ll Use the Country’s Best Network

Verizon's new 4G network is a huge step forward. This is how you'll experience it 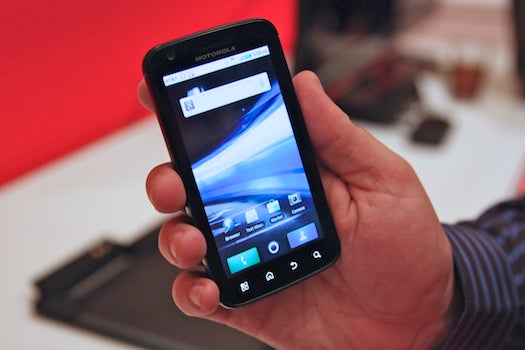 At Verizon’s CES press conference, we got a full look at the range of devices that’ll use VZW’s new 4G network (for more info on the confusing world of 4G, check out our explainer). The phones and tablets are definitely of a type, exclusively running Android, but they all look pretty solid. They’re more important because they’ll be your way in to next-gen, super-fast mobile speed.

We already knew about some of the devices that’ll be early users of Verizon 4G–we’ve been drooling over Motorola’s Atrix 4G, its mid-tier Bionic, and Xoom tablet. But the Xoom is still awhile off–its OS, Google’s Android 3.0 (Honeycomb), isn’t even out yet–so there’s definitely a spot for another 4G tablet to jump in at launch. That tablet is…the Samsung Galaxy Tab, a 7-inch Android 2.2 tablet that debuted to middling reviews a few weeks back. Verizon’s version is supercharged, however, with a 1.2GHz Hummingbird processor and, of course, 4G speeds.

In terms of phones, we’ve got the LG Revolution, a sleek phone that looks like an Optimus half-sibling. Verizon wasn’t spilling too many details about its internals, but it ran incredibly smoothly, pointing to a quick processor of some variety (maybe a dual-core Tegra 2?). There’s the HTC Thunderbolt, which looks like Verizon’s answer to Sprint’s HTC Evo 4G: a huge 4.3-inch “Super LCD” screen, 1GHz Snapdragon processor, Dolby surround sound (whatever that means, coming out of speakers the size of tic-tacs), and an 8-megapixel camera. Samsung has a phone as well as the Galaxy Tab tablet (tab tablet, what a gross phrase), though the phone is still unnamed. It’ll pack a 4.3-inch Super AMOLED Plus display, like the Infuse 4G, and a front-facing camera for video chatting.

There’s also a smattering of miscellaneous 4G gadgetry, including a MiFi wireless hotspot and 4G-enabled computers (probably netbooks) from HP/Compaq.

Of this early lineup, Motorola’s looking like the one to beat. The Atrix and Xoom tablets are innovative, surprising, and boundary-pushing performers, while the offerings from LG, HTC, and Samsung are sort of pedestrian in comparison. Don’t get me wrong, none of these look like crappy phones–they’re all high-end, solid performing devices. But if you’re going to jump on a next-gen network, shouldn’t your phone also seem next-gen?