Sony at CES: Everything But the Smartphone Is Now 3-D 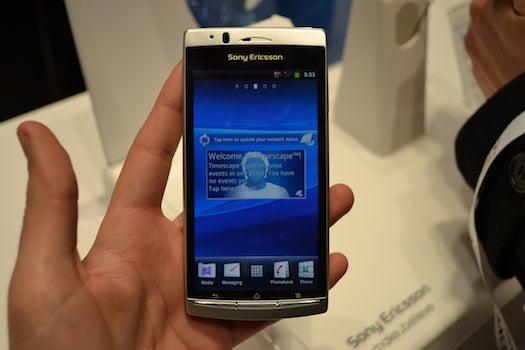 Sony’s conference at CES had one obvious theme: Make everything 3-D. It seemed like everything they announced last year was back, except now it’s in 3-D. That includes camcorders, cameras, pocket camcorders, TVs, Blu-ray players, and laptops. Pretty much the only thing that wasn’t 3-D was the new Sony Ericsson Xperia Arc–a really nice-looking Android smartphone focused on entertainment and media above all else.

Sony’s Bravia TVs are some of the best (albeit priciest) around, and this year’s models look great–but these are incremental upgrades. Many of the 27 new Bravias now have 3-D and a connected-TV package, part of Sony’s massive 3-D push, and the flagship, the XBR-HX929, is no exception. The XBR (as it shall now be called) will be available in 65-, 55-, and 46-inch models when it’s released this August for unspecified prices.

Its screen is made of Gorilla Glass, a nigh-indestructible material that’s becoming popular in smartphones, and it features full-array LED backlighting with local dimming. That complicated phrase basically means that the screen is backlit from behind, rather than the sides, and the brightness can be adjusted in specific areas, which allows for far deeper blacks. 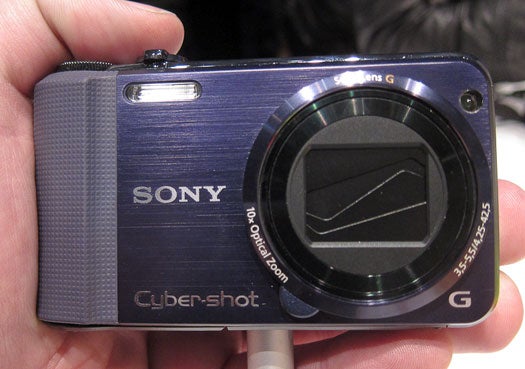 Sony took a step back from DSLRs and interchangeable-lens cameras to focus on simpler point-and-shoots this year. They’ve got a few, scattered amongst the usual categories (ultrathin, budget, full-featured), but they share a few key features. They’re all 16.2-megapixel cameras (though you shouldn’t be fooled by megapixel counts–the Nikon D3s, arguably the best DSLR on the market, has only 12.1) can all take 1080p video at 60fps, which should make for pretty smooth footage.

What’s really new and unusual is, paradoxically, true to the rest of Sony’s products (and CES as a whole): 3-D. These cameras take 3-D stills in kind of an interesting way: Instead of having two lenses, like 3-D camcorders, the single lens in these cameras shifts focus immediately after shooting and takes a second shot, providing the right eye/left eye dual image needed for 3-D. It’s a clever solution, and the photos don’t look half bad. 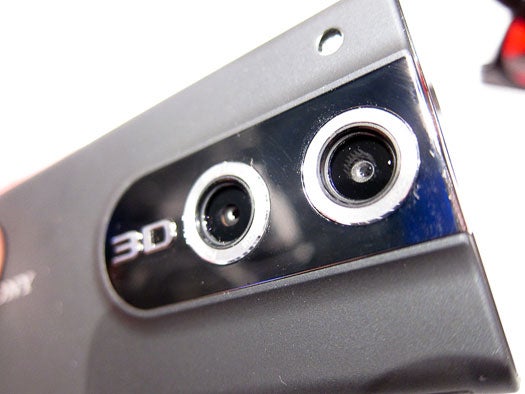 Despite the insipid name, the Bloggie isn’t a half-bad pocket camcorder, competing handily with the Flip and its ilk. Of course, as smartphone video gets better and better, pocket cams are becoming obsolete, so Sony took a major step to prevent that. See if you can guess what that step is?

The new Bloggie’s got two lenses side by side to take 3-D footage, and look pretty solid on a 3-D laptop’s screen. It also takes 5.1-megapixel photos, and actually has a glasses-free 3-D screen on the front so you can preview your videos without whipping out 3-D glasses. It’ll be available in April for $250.

Sony has some interesting ideas for smartphones, but its Sony Ericsson imprint hasn’t yet been able to put them together in a compelling way. Its Xperia X10 Android phone, released earlier this year, suffered from severe lag and an outdated brand of Android, but the company is hoping to rebound with the Xperia Arc. The Arc is incredibly thin, with a big 4.2-inch screen dubbed the “reality” display and powered by the same graphics engine as Sony’s Bravia TVs. It’ll run Android 2.3 (AKA “Gingerbread”) when it’s available sometime in the first quarter of 2011.

I played around with the Arc a bit, and generally liked it. The screen really is great, the phone was very responsive, and I like Sony’s entertainment-heavy approach to Android (it offers a completely new music, video, and photo experience–for the better, I think). On the other hand, while the phone is very thin, it’s also distressingly plasticky and cheap-feeling. We’ve come to expect a premium feel from our premium phones, and the Arc really drops the ball. It doesn’t feel particularly fragile, and I like the ballsy Android skin (it is one of the most radical Android skins out there), but I’m not sure it can compete with the new crop of dual-core, 4G superphones.