Nvidia’s Ultra-Low-Power Processor Could Power Your Next Laptop 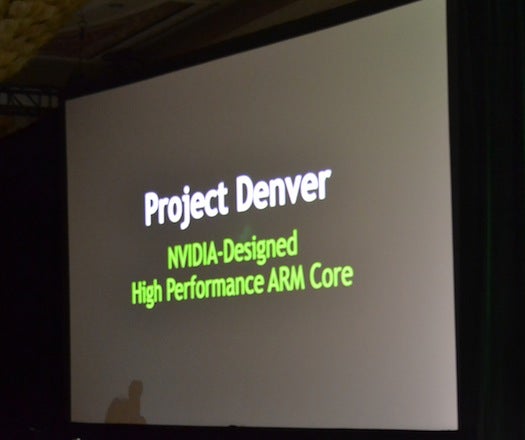 Nvidia had a surprising announcement left for the end of an otherwise hyperbolic press conference: a chip known as “Project Denver” (mysterious!) that’ll be the company’s first processor, based on the ARM core but destined for higher-power machines. What does that mean in real-world terms? It means your next laptop might have amazing battery life, maybe even the mythical all-day battery, without sacrificing too much performance.

ARM is a base setup used by pretty much every mobile device on the market, from the iPhone to the newest Android phones to the iPad and the Samsung Galaxy Tab. All those other processors we drool over–the Snapdragon, Tegra 2, Apple A8, Hummingbird–those are all based on ARM architecture. It gives impressive performance with amazing battery life, unlike the more powerful but much more demanding x86-based chips like Intel’s Atom (the processor found in most netbooks).

Nvidia is primarily a graphics company, churning out some of the best GPUs (graphics processors) around. Lately, they’ve been getting into systems-on-a-chip with their Tegra 2 line, a single- or dual-core chipset that’s powering a lot of the hotter smartphones we’ve seen so far at this year’s CES. But Project Denver isn’t due for smartphones and tablets–it’s aimed squarely at laptops and desktops, making it the first ARM-based processor we’ve seen that’s intended to power entire computers.

This could only happen now, really; neither Windows 7 nor Mac OS X support ARM-based processors, but Microsoft confirmed that the next version of Windows (Windows 8?) will support them (potentially opening up the world of desktop Windows even wider to include additional ARM-based mobile tablets and phones). And, of course, there’s that new OS on the scene: Google’s nothing-but-the-browser Chrome OS. That means that your next computer, if it runs Chrome OS or Windows 8, could pack one of these ultra-low-power chips, which would grant that computer excellent battery life, lighter weight, smaller size, and given Nvidia’s graphics history, probably little loss in everyday graphics ability. That’s pretty impressive stuff, provided Nvidia can actually make and get these chips into computers people want.