It’s wasn’t unexpected but for those of us running Snow Leopard on our Macs it is significant: Apple launched it’s... 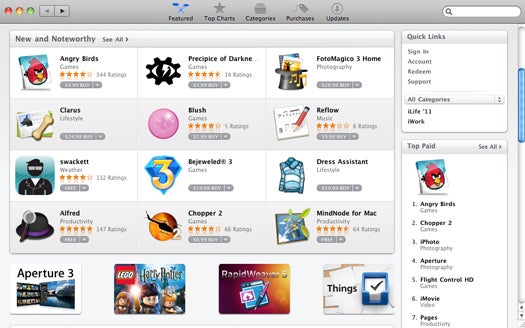 It’s wasn’t unexpected but for those of us running Snow Leopard on our Macs it is significant: Apple launched it’s Mac App Store today as part of an update to Mac OS X 10.6, bringing the current version up to 10.6.6. For the uninitiated, the Mac App Store is like the App Store in iTunes that lets you purchase and load software apps to peripherals like the iPhone, iPod Touch, and iPad, but the apps are optimized to run on your computer. That’s right: Angry Birds for your desktop.

The launch hasn’t been completely without glitches – some users have reported experiencing “unknown error 100” messages when navigating. But initial reviews are largely positive, accompanied by the usual smattering of negative Apple-bashing appraisals (they’re not without merit; check out Lifehacker’s righteous list of grievances).

Perhaps the biggest initial pro: Apple’s iLife ’11 offerings are available piecemeal for $14.99 and iWork programs (Pages, Keynote, Numbers) are available a la carte for $19.99. So if you need a word processor and you like iPhoto but don’t feel the need to create slideshow presentations or GarageBand ballads, you don’t have to pay for what you don’t use.

But naturally Apple offerings are the minority. More than 1,000 paid and unpaid apps are available at launch, ranging from the free to the pricey (among the pricier apps I saw after a quick spin around the store: Apple’s Aperture 3 at $79.99. Unsurprisingly, it was also the top grossing app at the time of this writing). The anticipated Twitter app for Mac (successor to Tweetie) is also live in the store.

You can’t download the Mac App Store, as it’s embedded in a system upgrade for Snow Leopard (sorry Leopard and Tiger users). To get it, simply run the software update function in the Apple drop down menu. When your computer finishes the post-update reboot, you’ll find that iconic Apple App Store logo (the one from the iPhone/iPad/iPod Touch) in your taskbar.