The Kinect’s more official uses, namely its games, have pretty much avoided tracking of individual fingers in favor of full-body... 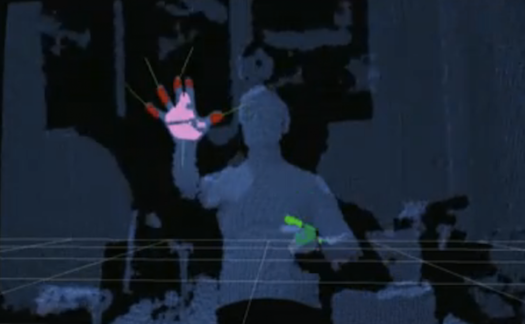 The Kinect’s more official uses, namely its games, have pretty much avoided tracking of individual fingers in favor of full-body tracking. That’s fine for traditional motion games of the sort pioneered by the Nintendo Wii, but the Kinect has potential far beyond ping-pong and dancing games–and a lot of that future depends on finger tracking for more delicate controls. Luckily, MIT’s Robot Locomotion Group and Learning Intelligent Systems teams took it upon themselves to show that the Kinect can absolutely recognize ten fingers and some relatively minute gestures.

The video, which, yes, is highly reminiscent of a near-decade-old Steven Spielberg movie featuring a diminutive action star and (if I remember correctly) a lot of shiny stuff blowing up, manages to show some basic photo manipulation using finger and hand gestures. Grabbing photos with two fingers, stretching with both hands, and shunting out of frame with a fast sweep of the hand–this is one of the most polished hacks we’ve seen yet. This kind of tracking is going to be essential if Microsoft wants to take the Kinect beyond just gaming, be it content creation or simply more detailed interfaces.

Don’t forget to check out our rapidly growing coverage of Kinect hacks, and our essential guide to setting up the Kinect for intended or illicit use.