The wrapper just came off Google’s newest version of Maps for Android (launching soon), and it looks pretty slick. Separating... 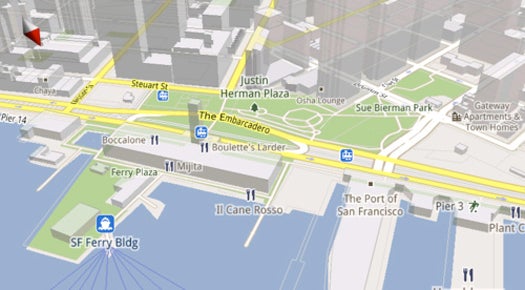 The wrapper just came off Google’s newest version of Maps for Android (launching soon), and it looks pretty slick. Separating the refreshed Maps 5.0 for Android from its predecessor: faster map loading, an iPhone-like function that spins the map according to the phone’s compass, and an offline mode. And did we mention that maps are in 3-D?

A new vector graphics scheme and small file size allows the updated Maps to load much faster, and the zooming appears to be extremely smooth – less the “zoom-load-zoom-load” experience common to smartphone apps and more like the smooth zooming experienced on the desktop. And as you smoothly zoom in, buildings begin to appear in 3-D. A tilt function even allows you to change perspectives, pitching the perspective more horizontally so you can see a buildings façade and better recognize landmarks.

Perhaps cooler still is the offline mode, which remembers areas you visit the most and stores that map data in the phone so you can access it without a wireless signal – a key development for those people who ride underground public transit but like to plot their next above-ground move while riding the rails. It also should compensate for the vast majority of the times the app fails when the connection is bad or intermittent.

When it rolls out – and it’s supposed to do so within days – it will run on any Android model running version 1.6 Donut. The more advanced features (multitouch map rotation, dynamic rendering, etc.) require more up-to-date hardware (Gizmodo thinks anything on par with the original Motorola Droid should do).