We all know that a television, any television, displays two-dimensional images–so how does a 3DTV create the illusion of that... 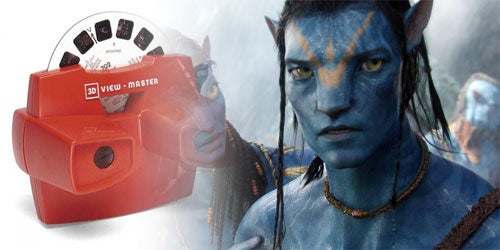 We all know that a television, any television, displays two-dimensional images–so how does a 3DTV create the illusion of that third dimension?

Creating the illusion of 3-D relies entirely on the fact that we have two eyes separated by a particular distance. If each eye is shown the same image shot from slightly different angles, when your brain combines the image, it will appear three dimensional. This is the principle that all 3-D effects use, from your old red Viewmaster to Avatar shown in IMAX. The Viewmaster showed a completely separate image image to each eye, though 3-D movies and television rely on different methods.

In the first method, the two images needed to create the effect are combined into one image. Each image can be altered by a color filter or a polarized filter. With the color filter the viewer will wear 3-D glasses with two different colored lenses. The glasses then block out one of the two combined images so each eye sees a different angle of the same shot, producing a 3-D effect. Orginially this method, called Anaglyph, required 3-D to be created without a color picture, but modern advances have allowed 3-D the use of color with this method–although color quality still suffers. Polarization uses the same princliple but rather than altering the color of an image it alters the waves of light the viewer sees. The glasses the viewer wears have differently polarized lenses which only show one image to each eye. Picture quality is better with this method and it is what is used in most 3-D movie theaters.

The second method involves powered 3-D glasses that have LCD screens for lenses. The glasses are synced to the display via infrared or some other protocol and the two different angles of each frame are shown sequentially to the viewer. The lenses alternately open and shut so each eye sees a complete version of each angle rather than parts of a combined version. This actually works similarly to the old Viewmaster mentioned above but rather than showing each eye a different image at the same time, the images are seen in rapid sequence. This is a very effective method of creating the 3-D effect but it halves the frame rate of the content. Video normally runs at 30 frames per second (29.97 to be exact) so with this method of 3-D each eye is only seeing 15 frames per second. This lessens the apparent smoothness of the content.

Another method of 3-D, without glasses, has been around for a few years but it is just now starting to come to market. This method uses filters or lenses in front of the screen to direct the separate images to each eye. Early versions of this technology required the viewer to maintain a very specific distance and position in relation to screen, as even relatively minor deviations would break the 3-D effect. Today combining the filters and/or lenses with a camera and face recognition software creates the ability to adjust the screen in real time to project to the split images to the current location of the viewer’s eyes. Nintendo will be using this technology on their upcoming 3DS handheld, and Microsoft has even created a screen that can project 3-D to 4 people in real time using this same principle.

Even though 3-D viewing has been around for more than century in one form or another, it really is still in it’s infancy. Expect more 3-D breakthroughs in the years to come as it’s popularity is on the rise again.

This article originally appeared at 3DTVBuyingGuide.com.