Is Your HDMI-Connected Gear Ready for 3D?

With evolving gear and constantly changing standards, staying current is getting trickier. 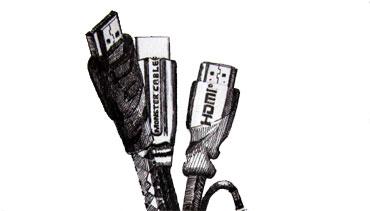 Oh, boy. Where do I begin? Fasten your seatbelts; it’s going to be a bumpy night. So…wires. You plug one end into A and the other end into B. Then electrons or some other things take care of the rest. Pretty simple, right? In the analog audio and video days, as long as the connectors were compatible, that usually worked.

Not so with digital. It’s all about bandwidth, chip sets, firmware, and transport streams. Keeping up with the latest digital interconnections is a full-time job. HDMI is the preferred way to convey uncompressed A/V data between devices such as Blu-ray Disc players, receivers, and HDTVs. And HDMI is attractive because one cable can carry high-definition video and up to eight channels of audio, and HDMI-linked devices can be designed to control one another. HDMI is also “universal” because, for example, it’s agnostic with respect to ATSC (North America) and DVB-T (Europe and elsewhere) digital television standards, conveying both equally well. HDMI is also backward compatible with DVI digital video signals, and it uses HDCP copy protection. Great stuff. And pretty simple again, right? Not really.

Like any technology, HDMI has evolved. Starting with version 1.0, which first showed up in products in 2003, it progressed through many different versions until reaching v1.4. That standard was released in May 2009 and offered some key improvements over v1.3. For example, it added an Ethernet connection channel to enable data sharing between connected devices as well as an audio-return channel. (Both features are optional; manufacturers aren’t required to implement them in HDMI v1.4 products.) Most significant for our discussion here, it defined specifications for conveying 3D video. This 3D upgrade is a bit confusing. (Is your seatbelt secured?)

HDMI v1.4 provides support for the mandatory 3D 1080p/24 (movie) and 720p 60 (game) formats. “High Speed” HDMI cables currently used for v1.3 can carry 3D but not the optional v1.4 Ethernet channel. (You’ll need a “High Speed with Ethernet” cable for that.) Now, there’s where it starts to get dicey. Some HDMI v1.3 devices will support 3D video. For example, if you have a PS3, Sony plans to provide firmware upgrades that the company says will let you output 3D video from the console’s existing port when watching 3D Blu-ray Discs. Knowing exactly what it is that your gear’s HDMI connections can and cant’ do can be confusing. For example, Sony claims that its newest “3D-ready” Blu-ray players can output 3D video, but because the ports don’t support the full set of HDMI v1.4 features, the company isn’t specifying which HDMI version is provided on the players.

What about other Blu-ray players? And what about cable and satellite DVRs, HDTVs, etc.? Will they handle 3D? That’s a gray area roughly the size of the Orion Nebula (24 light years across). DirectTV says its satellite receivers will be 3D-ready, requiring only a firmware update to deliver 3D video in the “side-by-side” format the company plans to deliver. Note that A/V receivers are also problematic because v1.3 models will not pass full 1080p-rez 3D signals from 3D Blu-ray Disc players. So, with a few exceptions, you can’t count on older devices to provide any 3D compatibility, let alone full HD 3D resolution. If you’re thinking of going 3D, I wouldn’t recommend buying v1.3 stuff.

And now, the latest wrinkle (told you this was going to be bumpy): In March 2010, the v1.4a specification was released. It adds support for additional 3D formats for broadcast TV content.

HDMI will certainly be the glue that holds together your future gear. If you want them to freely converse, to make sure your new device is completely up to date and genuinely 3D-ready, you should look for v1.4a, right? Not so fast.

The HDMI licensing organization now discourages manufacturers from labeling products with HDMI versions (such as v1.4) unless they also list the specific HDMI features that are supported (See: HDMI.org). A lot of manufacturers won’t bother; they’ll just say the devices has an HDMI port.

So how do you make sure you new device supports 3D? Cross your fingers, put on the glasses and see if anything jumps out at you. Okay, you can loosen your seatbelt now.