Before you try to jump on the 3D bandwagon, make sure you know what you need 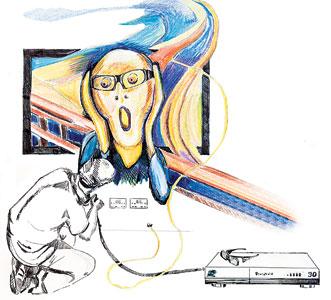 My dad called me the other day. He had just rented Avatar and he wanted to know if I had seen it and if the version I watched was in 3D and why his wasn’t. A client sent me an e-mail asking whether he could use a new 3D TV to watch regular, non-3D programming. Another client asked if his PlayStation3 would deliver full-resolution, 1080p 3D Blu-ray playback after the promised firmware update. Another client asked if the cabling we installed would support 3D. And another client asked. . .

You get the idea: 3D is confusing. Confusing enough to those of us in the business who do our best to keep up with it, but even more confusing to those on the sidelines trying to make smart buying decisions. While the 3D advertising blitz has done an amazing job of hyping this new technology and raising awareness, it seems to have done an even better job of making people unsure exactly how this extra dimension works. Clearly, people the world over are wondering just what 3D means and what they need to make it work and enjoy it at home. Those of us in the custom-installation trade have found that 3D has raised other questions that we’re being expected to answer.

One of the most important things that installers deal with is cabling, as in making sure that all of the cabling needed for now and — more important — the foreseeable future is in place. This is even more critical when running wiring through walls that won’t be easily replaced. A large part of being able to watch 3D is choosing components — TV, Blu-ray Disc player, A/V receiver — that are compatible with the new HDMI 1.4 specification. However, you won’t (or maybe more accurately you shouldn’t) see the term “1.4” on any HDMI cable, which can actually confuse people looking to 3D-ify their systems. This is because the HDMI group discourages manufacturers from using any HDMI version number in their labeling or packaging going forward, starting with 1.4.

How do you know if your current cabling will work?

As far as your cable is concerned, 3D is only a matter of bandwidth, and according to Michael Schaller, director of Kordz USA, if your existing cables reliably pass 1080p signals, you should be okay. This includes all of those homes that were wired with DVI cabling a few years ago, before HDMI exploded on the scene. So, yes, my friends, if you’re using DVI — and get the appropriate DVI-to-HDMI adapters on each end — and you can view 1080p from your Blu-ray player, you can enjoy a 3D future.

When running new cabling, installing HDMI cables rated or labeled “High Speed,” meaning they’ve been verified to perform at speeds up to 340 MHz or 10.2 Gbps, would be best. Future-looking installers should also consider running conduit and/or additional Cat-5/6 wire runs to accommodate any future, higher-bandwidth needs, especially to areas where a future retro would be a difficult or even impossible scenario. Another consideration is that as bandwidth diminishes over distance, choosing cabling with bandwidths exceeding 10.2 Gbps for runs exceeding 10 feet can offer added insurance.

Another issue has been the caliber of components available that support 3D, specifically surround-sound receivers. While the receiver isn’t doing anything special for 3D, it needs to be HDMI 1.4-compliant in order to pass the video signal through it on to the TV. And if you want to enjoy the benefits of next-gen audio formats like Dolby TrueHD and DTS-HD Master Audio — and trust me, you do! — then running the audio through the receiver is required. Unfortunately, the first batch of HDMI 1.4-capable A/V receivers have been much lower-end than the models typically employed by custom installers, with most selling in the $500 range. (Onkyo recently announced a slate of upperend, higher-performing THX-certified models that will hopefully trigger more to come from other manufacturers.) This has meant that clients wanting to enjoy step-up features like better amplification and signal processing have had to do it at the expense of no 3D.

One terrific solution to this dilemma would be using a Blu-ray Disc player like Panasonic’s DMP-BDT350. This player features two HDMI outputs — a 1.4-capable out for the 3D video to the TV and a 1.3 out to send highresolution audio to any receiver or processor — making it a perfect problem solver. Even more problematic is what faces anyone planning on using a housewide HDMI video-distribution system. These rely on a video- distribution device called a matrixer, which allows a given number of inputs to be routed to a given number of outputs. However, manufacturers have yet to develop a 1.4-compatible model, meaning that the 3D video won’t pass through the signal chain.

One of the fun parts of being a custom installer is solving problems. And while 3D has certainly turned out some master-level Sudoku challenges along the way, its potential of cool things to come should make it worth all the effort.

This article is cross-posted from Sound & Vision.