There are all kinds of ways to check your phone for updates like new email, ranging from audible alarms to... 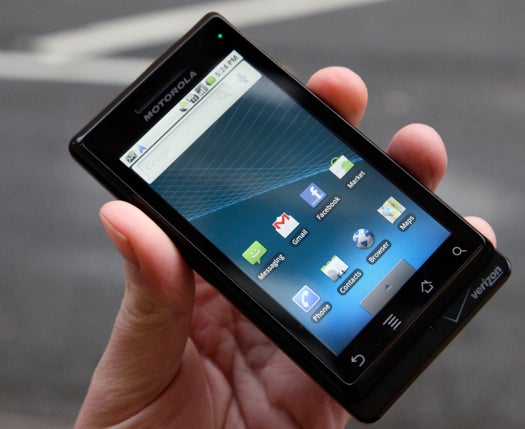 Shwetak Patel and his fellow researchers at the University of Washington in Seattle have developed SqueezeBlock, a pressure-based casing that expands and contracts to mimic the tactile feel of a spring. (You can read their report here–warning, it’s a PDF.) The casing has tiny motors built inside it which both detect pressure and provide feedback in different levels.

Lab tests showed that users can typically distinguish four levels of firmness, which gives at least as many options as an indicator light (which often, as on Android phones, have several different possible colors). Plus, a squeezable phone is silent and doesn’t need to be removed from the pocket, making it perfect for surreptitious phone-checking. With four levels, the phone’s firmness could indicate battery life, missed messages or phone calls, or even volume–a quick squeeze could reassure you that yes, your phone is in silent mode.

There are also UI possibilities, although the provided examples seem a little unnecessarily complex. (A phone could expand to the right to indicate that there’s more content on the right side of the screen–I mean, sure, but that could be accomplished with an on-screen icon much more easily.) But some apps could use it, whether to provide a new form of force feedback in games or to, say, expand right or left to indicate level or balance.

I can foresee some practical obstacles that might outweigh the benefits. Hardware manufacturers like Apple and HTC and already struggling to cram a processor, memory, storage, screen, inputs, connections, sensors, and all kinds of other detritus into ever-shrinking smartphone cases. The SqueezeBlock tech would involve a larger case, to make room for the new plates and motors, and I’m not sure the advantages over, say, haptic feedback and a blinking light are worth the extra few millimeters. (Or at least, I would bet that’s how Apple and HTC see it.)

Still, the idea of a phone that changes its physicality is an enticing one, especially as smartphones move further towards designs that are little more than a screen.