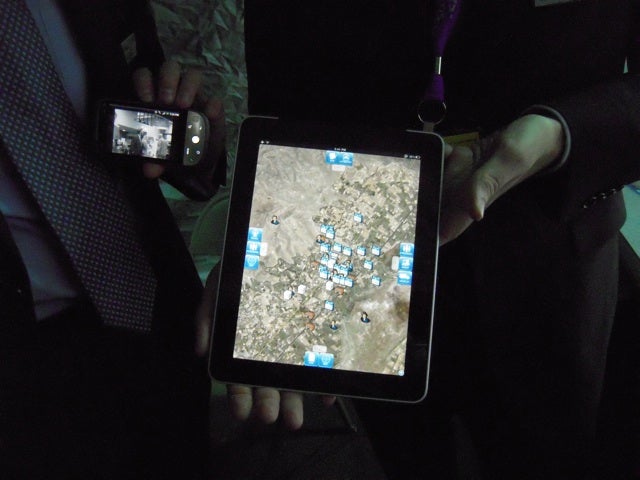 At this year’s Association of the U.S. Army gathering, developers showed off a handful of new military-focused apps (using consumer hardware, mostly) that bring a new level of seriousness to our gadgets. Sure, you may be an expert tower defense game player, but what about defending actual towers?

The apps mostly center on mapping, in various forms. One of the best uses of a smartphone in the consumer world is the ability to center yourself, to find out where you are and what’s around you, good and bad. In the military, it’s not so different, but instead of finding good coffeeshops and avoiding the C train, you’d want to know the locations of your allies and enemies. There are a few different ways to do it, some of which works with specific hardware.

The iPad, with its big screen, is a great device for GPS mapping. The image above, from Textron Systems, uploads the locations of friendlies and unfriendlies to SoldierEyes, a secure cloud-based service. Then there’s Raytheon’s curiously named RATS (Raytheon Advanced Tactical Systems), which provides a sort of buddy list that allows secure sharing of locations between users. Instead of SoldierEyes, RATS uses a server called RATMAN (no word on if Raytheon swiped some of DARPA’s rogue acronym-writers for this).

But the iPad notably lacks a camera, so it can’t handle any kind of augmented reality. Local Augmented Reality, which also uses SoldierEyes, is an Android app that allows you to hold the device up like a camera and see icons representing allies or enemies, even if you can’t physically see them.

These apps aren’t available in the App Store or Android Market, for pretty obvious reasons, and aren’t currently being used in the field–but they definitely give the smartphone in your pocket an element of potential danger. It’s great seeing our own gadgetry being used for insane/deadly purposes, like flash drives, iPhones, and, um, dogs.