Dentsu London and Berg teamed up to create this stop-motion film, entitled “Making Future Magic.” It’s driven by a 3D... 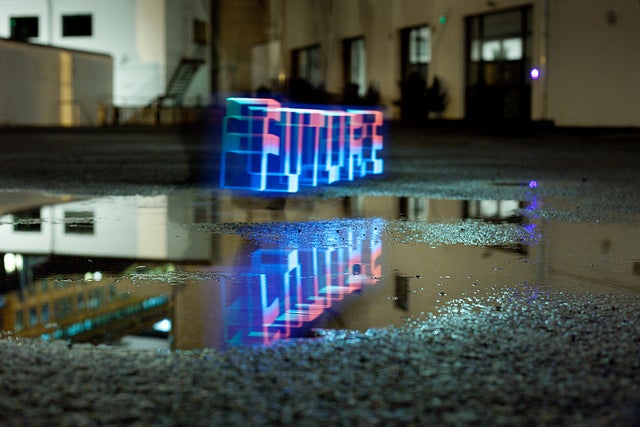 Dentsu London and Berg teamed up to create this stop-motion film, entitled “Making Future Magic.” It’s driven by a 3D light-painting technique, one I’ve never seen before: It’s extruded from an iPad, like Play-Doh through a press.

Berg London is one of our favorite design teams–no wonder, since they made the Mag+ platform on which our iPad app, Popular Science+, is built. You can read more about that here.

The animators came up with a brand-new method of light painting, one that’s simple but leads to unearthly and very cool results. The animators create 3D models of whatever they want to show in the film–in this case, often typography, but also various objects and little anthropomorphic characters–and chop them up into cross-sections. It’s like a CAT scan, more than anything else–a whole bunch of individual slices of a 3D whole.

Those slices are compiled into animated movies, and played back on an iPad. But here’s where it gets interesting: The team then drags the movie-playing iPad backwards while capturing the path with long-exposure photographs, about 3-6 seconds apiece. The photographs (of which about 5,500 were taken) capture the path of the iPad’s light.

But due to human movement, the iPad isn’t perfectly moved, like on a dolly–there’s jiggling and hesitation and deviations. So not only is the original 3D rendering turned into a light painting, but one with motion and flaws. It’s a pretty peculiar but also mesmerizing way to animate, and it’s always fun to see new ways to use the iPad (in addition to the usual ones, like religious services and dolphin communication).

The best of the still photographs from the film are available in a print-on-demand book, which costs about $60 (or $44 for the softcover).