A new opera produced by the lab behind Guitar Hero technology includes robotic singers, interactive instruments and a focus on... 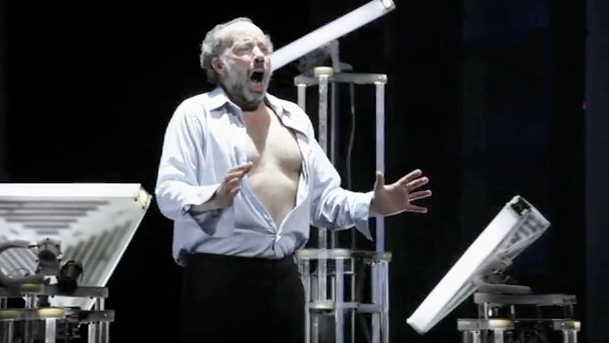 OperaBots twirl and sing along with the human performers in the new opera "Death and the Powers.". MIT Media Lab
SHARE

A new opera produced by the lab behind Guitar Hero technology includes robotic singers, interactive instruments and a focus on technology that could change the way we experience live performances.

“Death and the Powers,” which has been 10 years in the making, premieres later this month in the city-state of Monaco, whose ruler, Prince Albert II, is the project’s patron. It’s the first royal performance to feature OperaBots.

The one-act production, which tells the story of a successful inventor and his plan to live forever through technology, uses gadgets as characters.

The opera takes place sometime in the future, when no humans remain — only robots. Former poet laureate Robert Pinsky wrote the libretto, which tells the story of an inventor named Simon Powers. Powers builds “The System” to preserve his legacy, allowing him to download his memories and personality into the built environment. His personage is then expressed through robots, giant blinking bookcases and a musical chandelier made of Teflon, which his wife plays like a harp.

There’s no explanation about where the humans have gone, but they left the robots a special text about relationships and the human condition. Gradually, by reading the text, the robots come to understand what it means to be human. Machover explains more in this video.

Machover said he was turned off by a recent Taylor Swift concert he attended with his teenage daughters, in which megascreens and boom boxes overpowered Swift herself.

“Theater has been especially bad at allowing technology to make you feel closer to the performers on stage,” he said.

Opera enthusiasts are already excited about the production — Marc Scorca, president and CEO of Opera America, hopes it will inspire other operas, MIT says. In that spirit, here’s to a future where opera means more than a Web browser. Break a leg, OperaBots!