Puzzle-loving gamers are better at solving molecular biology problems than a supercomputer, according to a new study published today in... 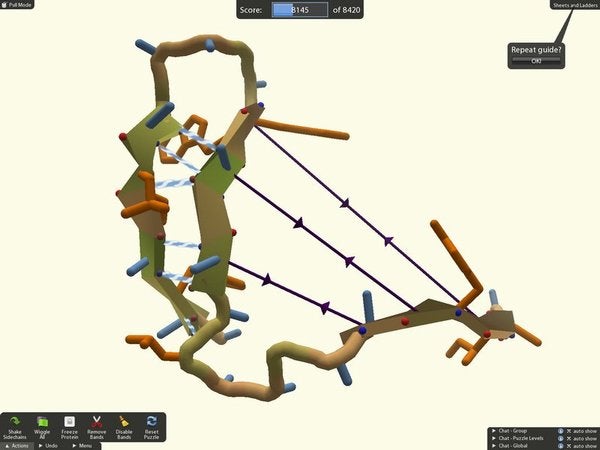 Puzzle-loving gamers are better at solving molecular biology problems than a supercomputer, according to a new study published today in the journal Nature. Playing a game called Foldit, which involves protein folding, gamers outsmarted computers on problems that required radical moves, risks and long-term vision.

The researchers, based at the University of Washington in Seattle, are incorporating the best Foldit players’ strategies into their own algorithms. Forget distributed computing — this is distributed thinking.

In what might be a video-game first, gamers will see their work translated into actual protein structures designed in the lab, according to the University of Washington. Last year, a Texas player who goes by the name “BootsMcGraw” was the first Foldit player to have his new protein design synthesized in the lab. Though it didn’t work, the researchers plan to try again and are optimistic about the possibilities, according to a press release from UW.

The program stems from Rosetta@home, which works like SETI@home in that it uses a network of idle home computers to crunch data. Biologists were using Rosetta to figure out how proteins develop their final three-dimensional shapes. They know which amino acid chains make up proteins, but the way they’re structured is not well understood, and that knowledge has huge potential, because proteins act as gatekeepers in the body.

Rosetta@home included a screensaver that showed users what the computer was doing. Sometimes the computer would get stuck on a tricky folding problem, but gamers thought it looked easy. “People started writing in saying, ‘I can see where it would fit better this way’,” says David Baker, a biochemist at UW in Seattle who developed Foldit, in Nature News.

Baker’s team figured they would let them try it out, and the result was Foldit, wherein players can compete, collaborate, develop strategies, gather points and move to different levels.

It turns out that humans’ highly evolved spatial manipulation talents were a boon for this type of problem-solving. Even a small protein can have hundreds of amino acids, meaning thousands of connections are possible — and that means plenty of work for a computer. But humans can often see the solution intuitively, Nature News reports.

Even NASA has turned to video games to make science more appealing, but as Ars Technica points out, this might be the first time gamers have helped solve an actual scientific question.

The paper’s author list acknowledges more than 57,000 Foldit players, which may be unprecedented on a scientific publication, UW News says. Hey, it’s got to be more satisfying than racking up ADAM.