If your video store isn’t already six feet under, XStreamHD will finally put it there. The company is launching the...

If your video store isn’t already six feet under, XStreamHD will finally put it there. The company is launching the first set-top system able to download movies that are the exact quality of Blu-ray discs: 1080p high-def, near-flawless images, and 7.1 surround sound. Subscribers can rent or buy 200 best-selling titles starting this month, with the full high-def film and TV catalogs of all major studios not far behind.

Web-based video-on-demand services, like Netflix and Amazon, compress their video to avoid hogging bandwidth, and often the result is grainy or blippy images, even if they’re high-def. XStream can deliver carbon copies of studio masters because it beams them via satellite. The company broadcasts over common low-power satellites, and a 2.5-foot dish on your roof grabs the signals. Then a server box in your living room uses specialized receiver chips to weed out interference and saves up to 160 films so they’re waiting for you the next time you turn on the TV. By default, it keeps the most popular titles, but you can also tell it to record specific films or genres and store them on its up-to-four-terabyte drive.

The server sends content to as many as four TVs via networked receivers such as XStream’s own or a PlayStation 3. The system will eventually be able to serve up on-demand videogames as well. 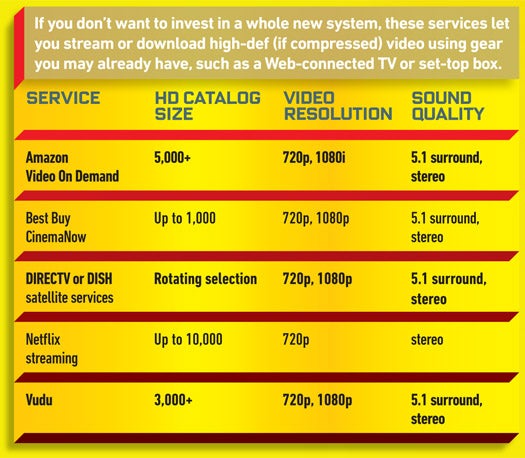