Microsoft’s Kinect, the controller-free, gesture-based gaming platform that finally saw an official unveiling at E3 this week continues to surprise... 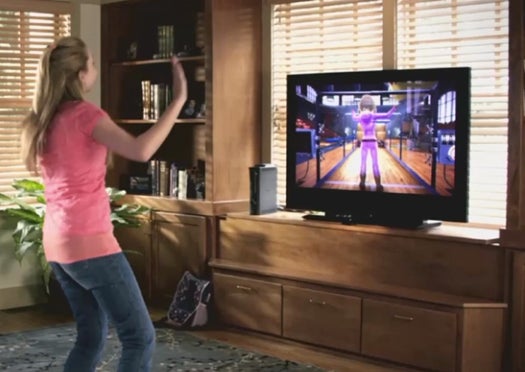 Microsoft’s Kinect, the controller-free, gesture-based gaming platform that finally saw an official unveiling at E3 this week continues to surprise us, but not always necessarily in good ways. For instance, we think it’s awesome that the non-peripheral peripheral can tell when a child is playing and adjust gameplay to be easier. However, we’re quite nonplussed with the discovery that Kinect apparently doesn’t work well at all if you’re sitting down. Being a couch potato suddenly became difficult, and we certainly didn’t see that coming.

Gaming is a social media, and though Web-based play means that while your gaming buddies may not always be in the same room, any platform should be able to accommodate family-style play. This is what makes the child feature of Kinect so cool: People of varying ages can step up to the Kinect, which can automatically change gameplay on the fly to an easier level for youngsters without someone paging through menu screens to make the adjustments manually. And it’s not just theoretical: the folks at Kotaku got a confirmation of just such a feature from the developers of one of the first Kinect games Joy Ride.

Because gaming should be an easygoing experience, right?

But with Kinect, that’s not necessarily so. Bloggers that have been demo-ing Kinect and talking to game developers all week at E3 have found that you can’t really use the system – which aside from being a gaming tool is supposed to allow for gesture control of media like television content and movies – unless you’re standing up. Playing video games (and especially watching movies and TV) and firmly planting oneself on the couch go hand in hand, so we’re hoping Microsoft is working feverishly on a fix for this gaming gaffe.