Classic Wristwatches Get a High-Tech Upgrade

Advanced technology transforms the classic wristwatch -- and keeps you on time 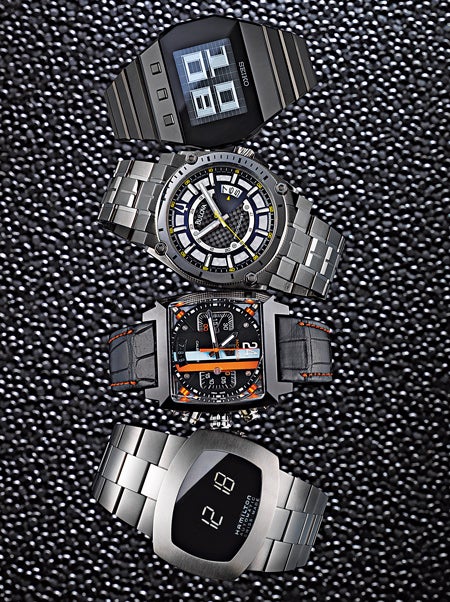 This prototype shows detailed graphics and text, not just blocky numbers. It’s the first watch to use a high-resolution version of an E Ink display—its 300 dots per inch far outstrip conventional LCD watches and even most e-readers. Yet its low-power screen and chip let its battery last about two years.
Seiko Active Matrix EPD Prototype, Price not set (available fall); seikowatches.com

Bulova’s Precisionist watches are among the most accurate in the world, gaining or losing just 10 seconds a year, not the typical 15 a month. They’re regulated by a high-frequency quartz crystal that vibrates 262,144 times a second, eight times the norm. That rate stays ultra-stable because the crystal’s three (instead of two) fork-like prongs resonate off one another to limit the fluctuations that result from changing temperatures.
Bulova Precisionist, From $300 (Sept.); bulova.com

A collector’s watch that costs 10 grand is worth protecting. And this one can survive a drop from 65 feet, or 24,000 Gs, because four shock-dissipating arms hold its sensitive mechanical gear system in place. They’re filled with an elastic polymer that absorbs large amounts of energy.
TAG Heuer Monaco 24, $10,900 (Dec.); tagheuer.com

The Pulsomatic is one of the few digital watches fueled by your movements, not a battery. A small generator inside converts the mechanical energy of a swinging weight into electrical energy, which it uses to run the quartz timekeeper and LCD. It can store enough power to last 120 days sitting on your dresser.
Hamilton Pulsomatic, $1,545 (Oct.); hamiltonwatch.com