With the strains of “Ave Maria” playing in the background, a Japanese couple said their vows Sunday afternoon under the... 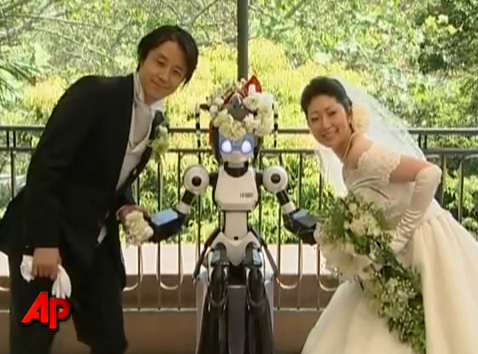 With the strains of “Ave Maria” playing in the background, a Japanese couple said their vows Sunday afternoon under the direction of a robot with flashing eyes and plastic pigtails. It was the first wedding performed by a robot, according to the manufacturer, Kokoro.

“I-Fairy,” a 4-foot-tall seated robot, wore a flower wreath and performed the ceremony in a tinny but seemingly excited voice, drawing laughter from the crowd.

The officiant-bot waved its arms, flashed its eyes different colors and moved its head up and down as a man behind a curtain entered commands into a computer, the AP reported.

Japanese companies are making a push to integrate robots into daily life. While a robot wedding is one way to do it, the bride and groom aren’t exactly everyday newlyweds — bride Satoko Inoue, 36, works at manufacturer Kokoro, and new husband Tomohiro Shibata, 42, is a robotics professor at the Nara Institute of Science and Technology in central Japan.