Today Sharp announced plans that could turn your cellphone into a 3-D-shooting mini film studio as early as next year.... 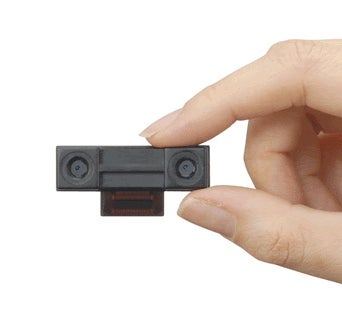 Today Sharp announced plans that could turn your cellphone into a 3-D-shooting mini film studio as early as next year. The company today unveiled a mobile-phone 3-D camera capable of shooting in high def.

The module captures 720p stereoscopic (two-eyed) video and is only about two inches wide. To put that in perspective: Fuji’s 3-D camera uses much larger, heavier sensors and only records standard-def video.

The camera on its own, though, needs help to produce a 3-D image. As with a 3-D TV or Blu-ray player, there needs to be an integrated circuit capable of decoding the stereoscopic signal, converting file formats, and then sending the information to a 3-D-ready display. Oh, yeah, Sharp has one of those, too: the glasses-less kind. In March, the company announced a small-format screen consisting of two stacked LCD screens; the screen on top only displays thin vertical black lines, which block half of the image at a time, so that your right and left eyes only see their own angles. The meshing of the two images is your brain’s job.

It’s been rumored for a while now that Sharp’s screen will be what makes Mario pop on the forthcoming 3-D Nintendo DS, so it’s only natural to intuit that maybe (just maybe) the DS will both display and capture in three dimensions. For the time being, though, it’s all just conjecture — especially considering that these camera modules won’t go into production for several more months, and Nintendo’s still mum on when the 3DS rollout might start.

We’ll be keeping our eyes peeled.