A great article in MIT’s Technology Review got me thinking of something that’s so obvious, but almost always subconscious: your... 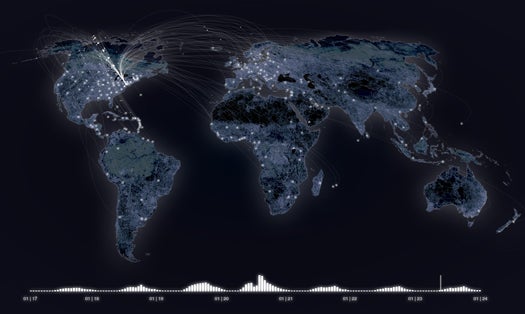 A great article in MIT’s Technology Review got me thinking of something that’s so obvious, but almost always subconscious: your mobile phone provider knows so much about you. Every time you make a call, send a text or download data, your provider knows who you were talking to and for how long, along with exactly where you were at the time of the connection, accurate to within a mile.

This staggering stream of data is a gold mine for the mobile operators–both from an academic and commercial perspective. Now, they just have to figure out how to make the most of it, answering complex privacy questions along the way.

These data reports, or call detail records (CDRs) have been kept for years, logging each connection with the specific ID of the cell tower that carried it. But only now are computer scientists developing alogorithms powerful enough to crunch the data in meaningful and efficient ways.

Tech Review spoke to Ramón Cáceres, a researcher at AT&T, on how his company is putting these newly acquired analytical powers to use. So far, it’s mostly academic and civic research. Studying travel habits of AT&T subscribers in New York and Los Angeles, for instance, Cáceres and his team found that the average Manhattanite travels 2.5 miles on average per day, while AT&T-using Angelenos log five miles. Another study, conducted by researchers at MIT, traced location data for mobile users attending major public events like a Red Sox game, analyzing how and when they travel to and from the stadium. Data such as these is proving incredibly valuable to city planners, who previously had to rely on limited surveys which are far less accurate.

But as you would imagine, the data is also tremendously useful (and valuable) commercially. Hyper-accurate location tracking could enable more accurate billboard advertising pricing, for instance. Every major network operator is now trying to decide how to use their golden pile of data for more revenue.

And of course, there are privacy concerns. Large analyses of CDRs are usually done anonymously. But one could very easily twist the numbers to, say, discern the home address of any subscriber by analysing which cell towers their phones connect to most often in the overnight hours.

Massive-scale mobile data analyses such as these are uncharted territory, and while the potentials for both revenue and insight is high, it remains to be seen how the privacy implications will shake out. Really interesting stuff–much more over at Tech Review.