A new Japanese office building that opened earlier this month in Osaka is home to two dozen ginormous window-view elevators,... 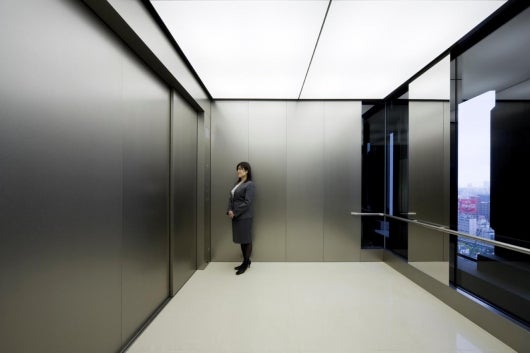 A new Japanese office building that opened earlier this month in Osaka is home to two dozen ginormous window-view elevators, the largest in Japan.

Japanese architecture is often notable for its smallness — this is the country that invented the capsule hotel, after all. But the commodious elevator is a more efficient way to move large amounts of people.

They are operated as shuttles between Hankyu Department Store’s Umeda store and several floors of offices, according to a press release [PDF].

The department store is located near one of Japan’s largest train terminals, and the shops nearby are a popular destination, meaning the elevators will probably see much more traffic than the picture shown above.

The Japanese also want to be the first to elevate to space, so perhaps it makes sense they’d install an enormous one in a building first.