Charge your gadgets' batteries using your own muscles. 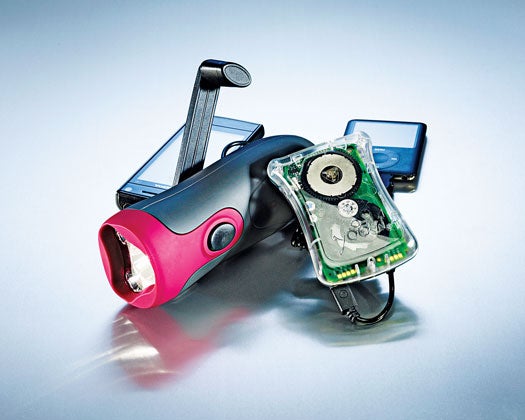 Stuck in the middle of nowhere with a dead cellphone? Hand-crank generators let you charge up without a wall outlet, but most of them require a lot of work for a little electricity. A new crop of human-fueled chargers aims to create more power and store it more effectively. We give two of the latest a whirl.—Sarah Parsons

The Tech: This crank-powered flashlight works in the conventional way: Each turn spins a generator’s magnets around a coil to induce current. But it stores its power in a car-bon ultracapacitor, which can be recharged 200,000 times (batt-eries last only 500 charges). Or it can bypass the ultracapacitor to directly charge gadgets, such as many phones, via a mini-USB cable and connector tips.
The Test: One minute of cranking for the light, and five minutes of cranking, paced at about the recommended 120 rpm, to try to revive a drained Nokia smartphone.
The Results: The simple-to-twirl CL1 didn’t tire out my arm. I easily filled the ultracapacitor in a minute, which ran the flashlight for 15. But the phone was a different story. After five minutes of work, the phone eked out just a three-second call; it took 10 minutes to get enough juice for 45 sec-
onds of talk. Verdict: The 1.2-watt output is great for a never-needs-batteries flashlight. For other gear, use only in emergen-cies (or if you have spare time).

The Tech: The YoGen promises five watts of power, compared with the one to two watts of most portable kinetic chargers. Instead of cranking, you pull and release a handle attached to a string. That triggers gears inside that spin two magnets at high speeds to create more current. With no battery inside, it transmits power directly to attached gadgets. You can get connectors for most popular devices, including iPods.
The Test: Five minutes of pulling on the handle, at about 110 yanks a minute,
with the same dead Nokia phone attached.
The Results: The YoGen is a workout, and my arm was weary after five minutes. But it was worth it. The phone turned on and I talked for an impressive five minutes, one for each spent tugging. That’s not as good as the grid (five minutes plugged into the wall gave 12 minutes of talk time), but it’s a lifesaver when you’re not near an outlet. Plus it’s better for the environment—and your biceps.