Imagining an Apple Tablet in 1989

Fast Company has a great post today from Tom Dair, co-founder of Smart Design, on the occasion Apple called for... 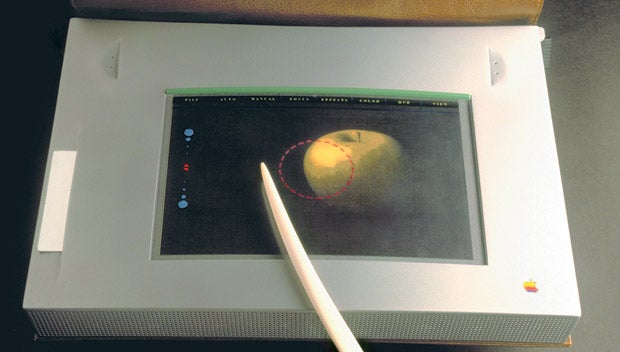 Fast Company has a great post today from Tom Dair, co-founder of Smart Design, on the occasion Apple called for his company to produce concepts for a futuristic tablet computer. But this was no iPad.

As Dair puts it, when he and his colleagues responded to an Apple call for design proposals, top-of-the-line Macs (the SE/30!) were boxy and beige. The Macintosh “Portable” weighed 16 pounds and cost $6,000. And the Web? Still but a glimmer in the eyes of those dialed into the era’s primitive Telnet and BBS services, their 1200 baud modems screeching.

Needless to say, sleek portables of aluminum and glass with touchscreen displays were beyond even the most fanciful pie-in-the-sky visions. But Dair and co.’s Smart Design prototypes are interestingly prescient. 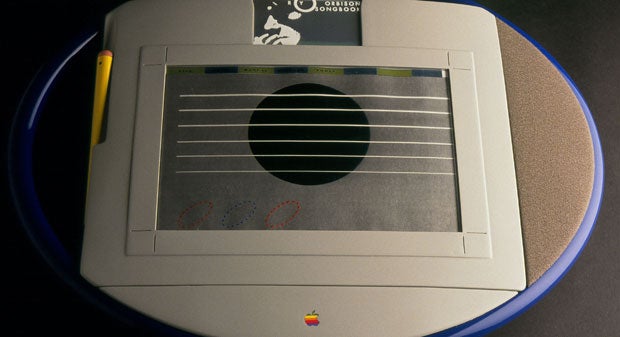 This one more rugged, with a circular grip that doubles as a stand.

They both envision touchscreens as the primary interaction point. The more rugged prototype even includes a guitar app where strings are plucked on screen–something we’d see reproduced faithfully in the iPhone App Store many times over.

That said, even when reaching big, it was still 1989: Smart Design’s two concepts are both exceptionally bulky by today’s standards. And one thing we can all be thankful for is the death of the stylus–I’d be on my 7th or 8th $20 replacement stylus by now, or significantly fatter from eating all those Korean sausages.

In the end, Smart didn’t hear back from Cupertino. And four years later, out popped the Newton, which was hampered by a number of infamous problems, but in hindsight, serves as a pretty viable stepping stone from 16 pounds of Mac Portable to the iPhone and iPad today.

Check out more from Dair’s interesting insider perspective over at FC: