What makes these everyday devices so innovative? We x-rayed them to find out 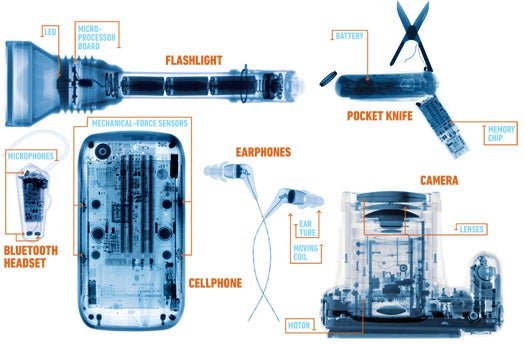 Flashlight: Surefire’s military-grade torch shines more than 500 yards, even though it’s not much bigger than your hand. Its LED combines four light-emitting chips on one circuit board, instead of giving each its own electronics and case. The result is a concentrated yet efficient beam. A processor regulates power to run for 100 minutes on high, 500 on low.
SureFire M3LT $450; surefire.com

Cellphone: Synaptics’s concept makes it easier to control a touchscreen phone with just the hand that holds it. To select an icon on the screen, you can either tap the screen as usual or tap behind it using a capacitive touch panel on the phone’s back. Mechanical- force sensors in both sides let you take a call with a squeeze, rather than having to look at the screen to find an “answer” symbol.
Synaptics Fuse Concept synaptics.com

Bluetooth Headset: Spracht’s phone headset packs more microphones than any other to transmit your voice clearly—and to double as a hearing-aid-like amplifier. The usual forward-facing mic captures your speech during calls. After you hang up, it and an extra front mic can refocus to boost sound from three to five feet away, helping you hear people in noisy rooms. In either mode, a backward-facing mic listens for ambient noise, like traffic, which the headset filters out.
Spracht Aura EQ $100; spracht.com

Earphones: These use the same kind of speaker found in most earbuds and earphones, a small moving coil that creates sound when it vibrates in response to a magnetic field. But simple tricks improve the sound without increasing cost. For instance, an extra-long eartube funnels tunes farther into your ear, and it flares at the end to help boost very high notes (think cymbals) that often get lost when forced through a small opening.
Etymotic mc5 $80; etymotic.com

Pocket Knife: In addition to the customary blade, file and scissors, this updated Swiss Army knife holds a laser pointer, a Bluetooth presentation controller, a removable 32-gigabyte flash drive, and batteries to power them all. The drive protects your data with a fingerprint sensor plus password-protection software that, if it senses an attempted hack, will send an electric signal that literally blows apart the memory chip.
Victorinox Presentation Master $300 (est.); swissarmy.com

Camera: This camera boasts a 30x optical zoom, the biggest yet in a point-and-shoot. The lens barrel, which measures less than two inches when closed and more than three when extended, hides 15 individual glass lenses. A precise motor moves groups of them back and forth to change the magnification, and the lenses’ different curves and types of glass combine to bend light and focus the image.
Olympus SP-800UZ $350; olympusamerica.com