The Future of Arcades: Get Inside a Human Hamster Ball

Yes: this is, in fact, the largest video-game peripheral you’ve ever seen. The VirtuSphere is a new interface that captures... 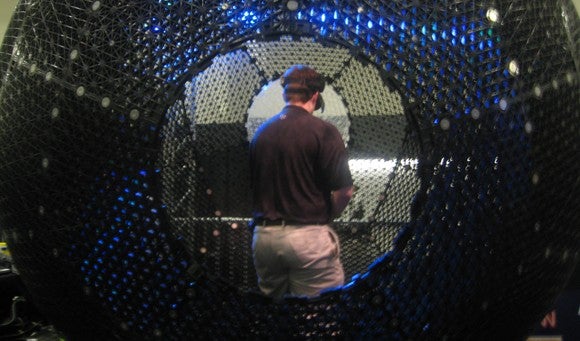 Yes: this is, in fact, the largest video-game peripheral you’ve ever seen. The VirtuSphere is a new interface that captures movements in 360 degrees, and translates them into a video game. The gang over at Joystiq first caught wind of the human hamster ball in ’06, but got to see it in the flesh just this week.

The system sees where and how fast you’re running through a sensor panel it sits on top of. A series of cameras inside the ball track when you spin around, and reorient your in-game avatar. The demo that VirtuSphere had on the Game Developers’ Conference floor was a simple, first-person shooter. The player holds a toy gun and wears a pair of goggles, which display the in-game experience in real time.

Since the sphere can detect more than just walking and running (think jumping, crawling, and rolling), the company sees its appeal spreading beyond video games and into more intense applications like personal gym training and military combat simulations.

There are currently about a dozen VirtuSpheres up and running across the globe (check out their Web site to see all the locations), but in case there isn’t one close to you, you can at least check out the video demo below.