Tapping a principle of quantum mechanics and a medieval-looking nanoparticle, a UK firm has created a composite material that may... 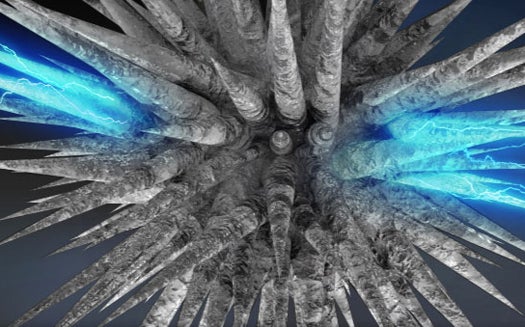 Tapping a principle of quantum mechanics and a medieval-looking nanoparticle, a UK firm has created a composite material that may soon deliver efficient, pressure-sensitive touchscreens to numerous devices. Yorkshire-based Peratech has already licensed the technology to a division of Samsung that provides mobile components to other handset manufacturers, but it’s in the growing realm of touchscreen tech where the potential for Quantum Tunneling Composite (QTC) is most exciting.

The composite works on an idea in quantum mechanics that if you shoot a tiny particle at a solid wall, there is a slim probability that it will pass straight through, based on an effect known as quantum tunneling. QTC is made by evenly dispersing a bunch of spiky, conducting nanoparticles resembling tiny medieval maces in a thin polymer layer. The nanoparticles don’t touch one another, but the closer they get to a neighboring particle, the more likely a charge will tunnel through and connect the two. Press the layer with your finger and the current running through it smoothly increases in correlation to the increased force.

Of course, QTC isn’t the only means of making a pressure-sensitive touchscreen, but it has some important advantages over other screen designs, most notably its efficiency. Switches, buttons and screens can be made pressure sensitive with mechanical switches, but these take up more space than QTC, a layer of which is only 70 micrometers thick (that’s human-hair thick). The nanoparticles also don’t have a constant current running through them, but rather fire off a current only when pressed, keeping power consumption to a minimum.

Just how might this change your touchscreen experience? Most basically, scrolling will become even more intuitive: press harder to scroll faster, or more lightly to slow your scroll. It could also add increase control to touchscreen gaming experiences (push harder to run faster or to throw the ball harder). It could even add a third dimension to 2-D touchscreen interfaces; by pressing hard you can move forward “into” a page on your phone’s homescreen for instance, rather than simply scrolling side to side or up and down.

That’s all a bit further beyond the horizon, but for now Samsung has already installed QTC in the basic joystick-style navigation button familiar on most non-touchscreen smartphones, making the up and down functions sensitive to pressure. Peratech is also developing pressure-sensitive materials for a variety of other uses including medical devices, robotic sensing, and industrial tools.