A New World’s Largest TV, With an Asterisk

This year at CES, Panasonic revived something we haven’t seen in a while–the battle of the biggest screen. Already the... 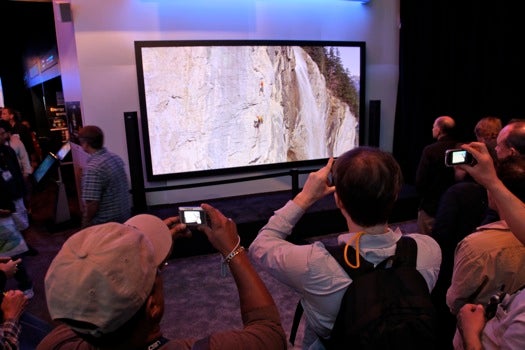 This year at CES, Panasonic revived something we haven’t seen in a while–the battle of the biggest screen. Already the current title holder with its 150-inch plasma screen from 2008, Panasonic came to Vegas this year with two 152-inch behemoths, bettering their own record. But there’s a bit of a catch.

The catch is that the 152-inch screen is made with the exact same piece of glass that created the 150-incher; tweaks to the bezeling opened up a tiny bit more screen around the edges, increasing the viewable images size by two inches (and stretching the aspect ratio to 17:9 from the standard 16:9).

That’s not to say that the 152-incher is just a cheap trick. The giant sets that make the rounds at tradeshows represent the largest single piece of glass the factory is able to produce. This “mother glass” is designed to efficiently yield the maximum number of panels when it is cut into the glass for smaller sets (the 152″ TV’s glass normally yields nine 50-inch TVs).

Dr. Larry F. Weber, an engineer who helped invent the plasma TV at the University of Chicago in the 1960s, was in Panasonic’s booth watching the oglers. He explained to me that in making a prototype set, it’s important to keep a larger margin around the outside of the glass to connect the display’s electrical components. As the technology improves, however, less space around the edge is needed.