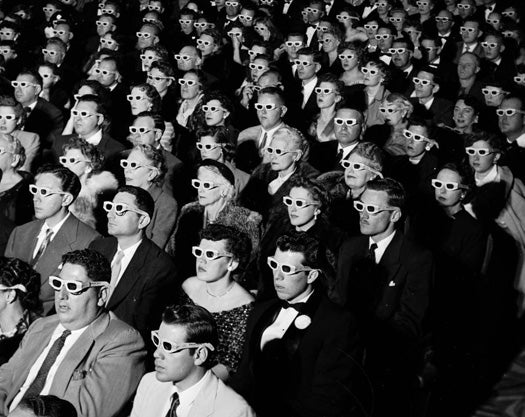 Let the 3-D deluge begin! The New York Times reports today that Discovery is partnering with Imax and Sony to create an all 3-D all the time HDTV station in 2011. The partnership is due to be announced officially this week at CES, which we’ll be covering live starting tomorrow. I’m going to start calling it 3-D-E-S from this moment forward.

If you’ve been noticing quite a bit of 3-D hype and hubbub lately–it’s no accident. The major entertainment companies are now scrambling to get a jump on what has been selected as the next big thing in movies and TV. The timing of James Cameron’s Avatar–the most advanced 3-D film yet–is not a coincidence; just as everyone who saw the film over the holidays is coming down from their three-dimensional high, wishing they were still in Pandora, a 3-D carrot will be dangled in front of all of our noses this week at CES, where every major manufacturer is expected to roll out HDTVs, Blu-ray players and other 3-D-supporting gear that promise to bring a similar experience into our living rooms.

In addition to Discovery’s 24-hour 3-D venture (3-D Shark Week is probably all I have to say), ESPN has recently announced plans to start “ESPN 3-D” in June of this year which will show “a minimum of 85 live 3-D events” according to the Times and USA Today.

Does it feel oddly like the 1950s to anyone else?

I’m about to head out for Vegas today, where we’ll keep you updated on the 3-D tidalwave to come.