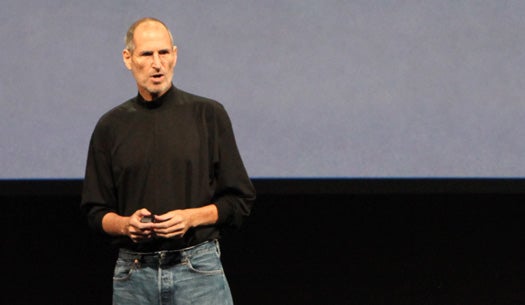 Update: Here are our hands on impressions of the iPad. Our liveblog with all the details of the announcement is archived here.

Starting at 10 AM PST (1 PM EST), we’ll be covering Apple’s tablet unveiling event from San Francisco, with reality distortion field shielding equipped. Check back here shortly before then for words and pictures from the event, updating live.

1:03: The man is on stage, ready to unveil a “magical” product. But first, some updates about the business. $15.6B in revenue Q1 2010, claiming #1 mobile device company in the world. By the way, connection issues here at the moment, so if I unexpectedly disappear, check out our friends at Gizmodo for more live coverage.

1:09: Steve: First to market with laptops in 1991, then “reinvented the phone” with the iPhone. Everyone uses a laptop or a smartphone now. Is there room for a third category of device in the middle? Third category will have to be far better at doing “some key things.”

Some people have thought that’s a netbook. Problem is, netbooks aren’t better at anything. Applause.

1:15: Steve’s relaxing in his chair demoing the iPad. Currently going through the browser, which seems to function exactly like the mobile Safari on the iPhone. Nothing new yet.

1:18: Now, email. Again, basically the same as iPhone, but with a paneled interface that’s more like Mail on the Mac. Typing, Steve holds the tablet on his knees and uses both hands to type on the soft keyboard.

1:19: Photos app looks like a hybrid of iPhone photos and iPhoto on the Mac. Seeing a trend here?

1:21: Get the feeling Steve is sandbagging here going through the basics. iTunes is here, described as a “built in iPod.” More of a hybrid mobile/desktop feel, taking advantage of the increased screen real estate.

1:25: People are applauding Google Street View on the iPad’s maps app, but it’s exactly the same as the iPhone implementation–just bigger.

1:33: Scott Forstall is up talking about the App Store on the iPad. It runs “virtually every” App Store app out of the box–either in a black box at native iPhone resolution, which doesn’t look too appealing, or resolution upscaled to full screen (with a slight loss of image quality, one would assume). Hard to tell on the big screen.

1:34: Here’s a snowboard racing app in the black box mode and upscaled:

To take full advantage of the larger iPad screen, developers will have to re-write their applications with larger UI elements. Developers can begin modifying their apps with an SDK available today.

1:38: Now we’re seeing demos from iPhone developers who have gotten a headstart on developing apps for the iPad. Gameloft is showing a first-person shooter that looks pretty impressive. Lots of touch controls for fighting. Clearly, an emphasis will be on games.

1:40: Now the New York Times: Been developing a demo app for the past three weeks. Why use an iPad app over the NYT webpage Steve demoed just a few minutes ago?

1:42: NYT app is looking to capture the essence of the printed product with similar layout and design, with video and digital content piped in.

1:44: Now Brushes, the popular iPhone painting app. This could be good.

1:46: Brushes looks pretty excellent–as you can imagine, more screen real estate will make finger painting easier and more natural. A nifty playback feature watches your composition go from a blank canvas to finished, each stroke at a time. Neat.

1:47: EA is demo’ing Need For Speed. Using the accelerometer to steer and working your hands around to do things like shift gears and change the camera view might be kind of tricky:

1:51: The MLB app looks pretty great with the expanded screen as well. Full-screen game simulations with picture-in-picture for videos.

1:54: Now here’s what many were waiting for: iBooks, an e-reader app with–yes–a built-in book store. iTunes for books. Publishers Penguin, Harper Collins, Simon & Schuster, Macmillan, and Hachette have signed on.

1:57: Steve’s hyping hard the benefits of reading books on a color screen (but, still backlit–get ready for some eyestrain?). Photos look great, pageturns are instant and animated, and multimedia can be integrated inline. It uses the e-pub format, and textbooks are in the works.

1:58: iWork is also coming to the iPad. Phil Schiller is onstage to demo what he and Steve are both pretty excited about, surprisingly. Keynote, Pages and Numbers have all been ported for presentations, word processing and…spreadsheets! Office work on an iPad? I guess!

2:02: Some nifty looking multitouch gestures have been added–tap presentation slides into a bundle and move them to replace–photo masking and resizing is also touchable and fairly intuitive-looking. Is this the future of the desktop Mac we’re seeing?

2:05: Phil just said Pages’ formatting ruler is the “most beautiful ruler you’ve ever seen in an application. OK!

They must be pretty confident with the iPad’s keyboard to include a full-fledged word processor.

2:09: Phil is holding the iPad with one hand and pecking at the keyboard with the other. Looks kind of awkward, but we’ll have to see for ourselves. What must surely be the iWork team sitting in the front is loving this demo. Wild applause.

2:12: Steve’s back filling in some more details. Full sync with iTunes via USB, just like the iPhone.

2:13: Interesting: iPads will be available either with wi-fi alone or with wi-fi plus 3G. And here’s the pricing: 250MB per month for $14.99, unlimited for $30. All through AT&T, which elicited some groans in the crowd. But this is nice: no contract necessary, and cancellation can be done anytime.

2:17: Pricing. Much lower than expected at $499 for 16GB and no 3G, but with lots of different pricing options. Lots of applause. They’re available in two months.

2:22: Now we’re talking accessories. As many expected, there will be a keyboard. And, another industry killed by Apple: digital photo frames. When in its dock, the iPad can show your photos.

2:28: We’re wrapping up with a video now, which will be online shortly. Thanks for joining–stay tuned for more iPad news after the event.

See our iPad hands on here