In an excerpt from our new Tech Buyer's Guide, learn everything you need to know to get the best point-and-shoot camera for the buck 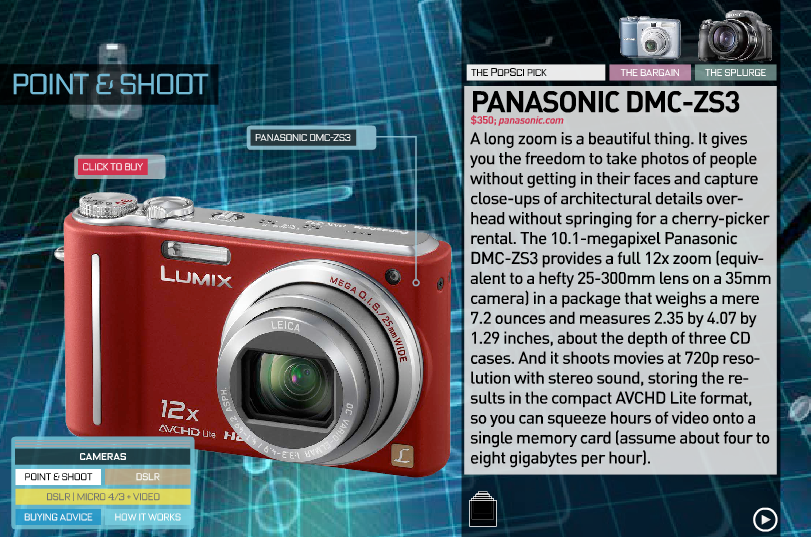 Each day this week leading up to Black Friday, we’ll excerpt a chunk of our new Tech Buyer’s Guide here on the site to arm you with the skills and the picks to get the most from your weekend shopping madness. Here are our picks for point-and-shoot cameras and our buying advice for digital cameras in general. Check out the guide for our picks in DSLR and Micro 4/3 cameras, as well as 15 other product categories. 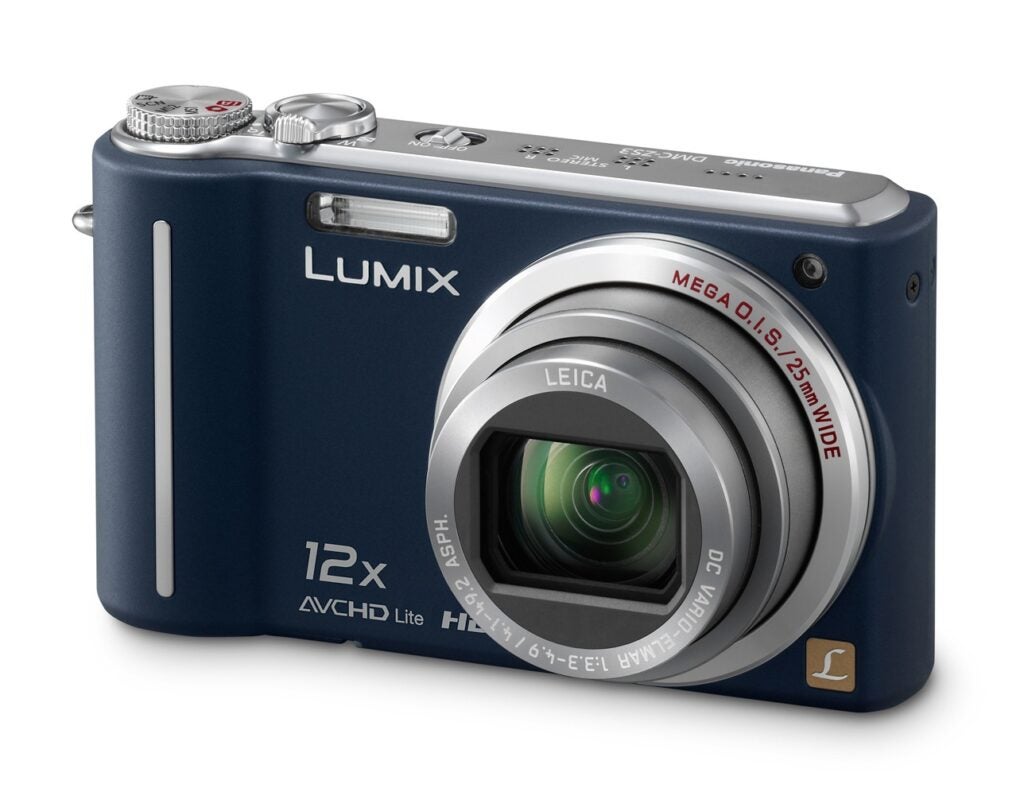 $350; Amazon.com
A long zoom is a beautiful thing. It gives you the freedom to take photos of people without getting in their faces and capture close-ups of architectural details overhead without springing for a cherry-picker rental. The 10.1-megapixel Panasonic DMC-ZS3 provides a full 12x zoom (equivalent to a hefty 25-300mm lens on a 35mm camera) in a package that weighs a mere 7.2 ounces and measures 2.35 by 4.07 by 1.29 inches, about the depth of three CD cases. And it shoots movies at 720p resolution with stereo sound, storing the results in the compact AVCHD Lite format, so you can squeeze hours of video onto a single memory card (assume about four to eight gigabytes per hour).

The ZS3 is a highly automated point-and-shoot camera with not much in the way of user control for finicky photographers, but Panasonic incorporates what it calls “Intelligent Auto,” which recognizes the scene you’re seeing, identifies it as Portrait, Scenery, Macro or Other, and adjusts the settings accordingly. It’s sophisticated and actually works well in most situations (and if the camera does seems to be bamboozled, you can take over). When it’s time to show off your photo and video handiwork, the ZS3 has an HDMI output to display video and stills in glorious high-def on an HDTV screen. And if you happen to own a Panasonic TV, you can even control the camera playback using the TV remote. If only it made popcorn. 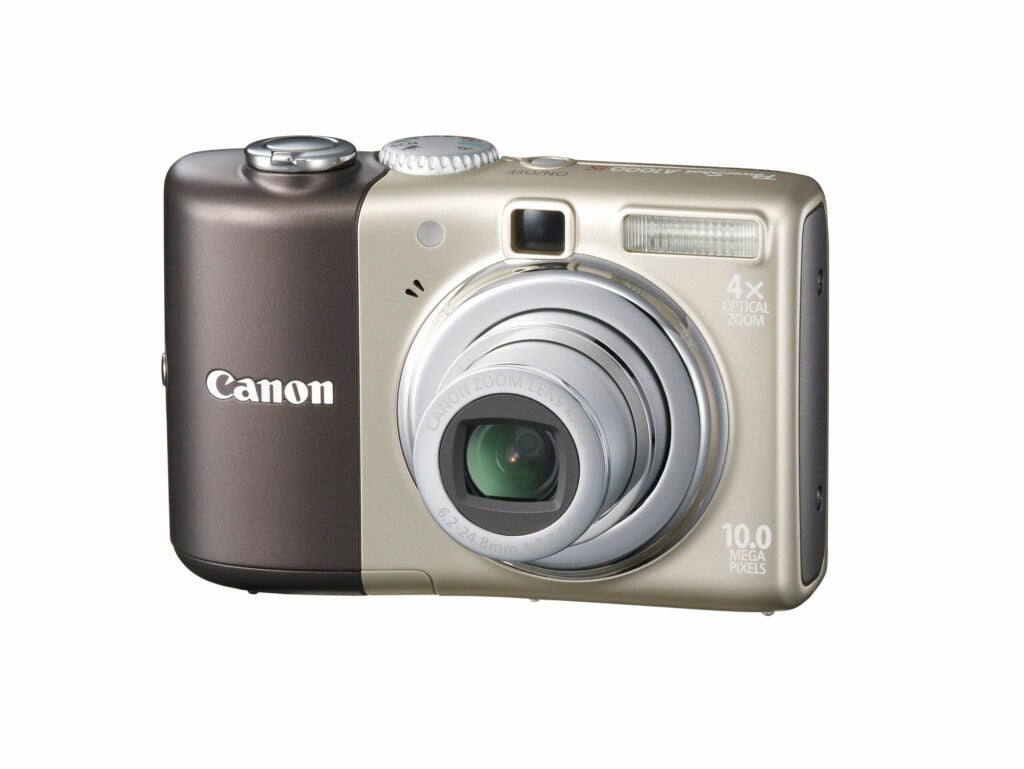 Canon Powershot A1000 IS

The Bargain: Canon Powershot A1000 IS

$150; Amazon.com
Flashy it’s not, but the 10-megapixel Canon A1000 IS offers solid photographic features at a price that will barely ding your wallet. The 4x zoom (equivalent to a 35-140mm on a 35mm camera) is a bit more generous than the typical 3x variety. There’s an optical viewfinder in addition to the LCD, an increasingly rare but incredibly valuable feature when trying to compose a shot on a bright, sunny day. There’s optical image stabilization to help fight camera shake. And we count the fact that the A1000 IS runs on AA batteries as a point in its favor—pick up some inexpensive NiMH rechargeables for daily use, and know that you can still grab a pack of AAs at a convenience store just about anywhere in the world if you ever run out of power, an option those fancy SLRs with their proprietary lithium-ion batteries don’t offer.

$500; Amazon.com
Compared with the Panasonic ZS3, the Sony HX1 offers a bigger zoom (an extraordinary 20x) in a bigger camera (18 ounces, 4.6 x 3.4 x 3.6 inches) with a bigger price tag. In addition to more zoom, though, the HX1 offers two intriguing Sony-only features. Taking panoramic pictures is nothing short of magic: When you press the shutter and swing your arm, the camera takes dozens of shots and automatically stitches them together, to eye-popping effect. When shooting in low light, two special modes take the least blurry sections of multiple images and combine them into one sharp photo. And if it’s speed you need, the 9.1-megapixel HX1 can capture an incredible 10 shots per second. 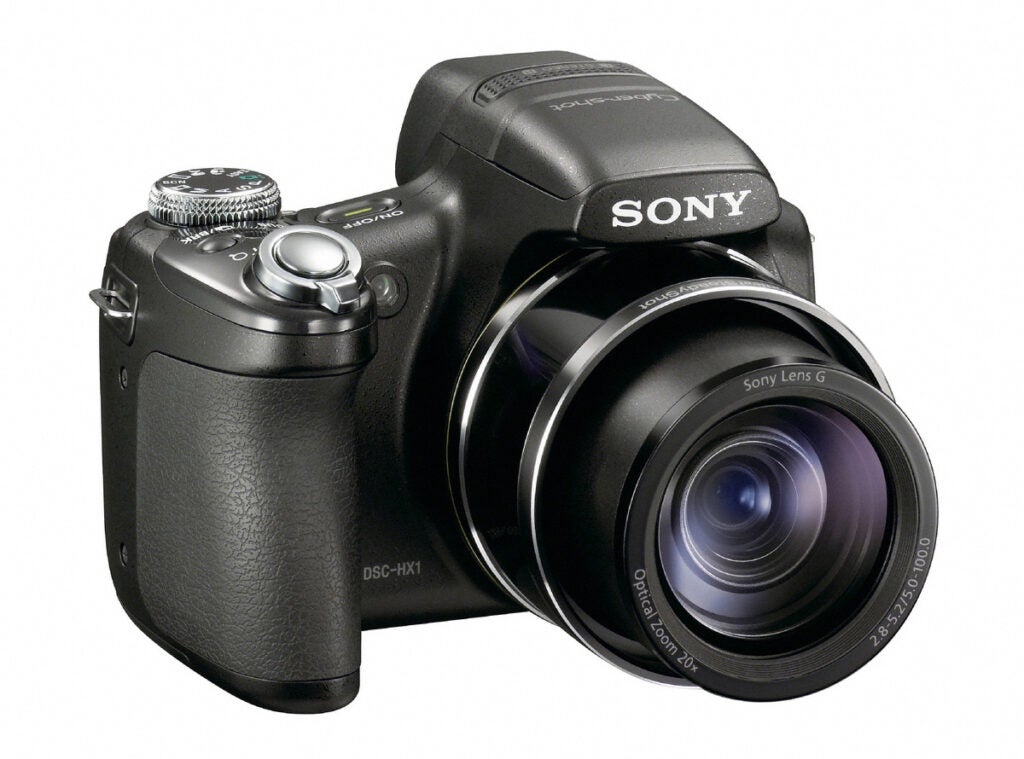 • Video specs: There’s a huge quality difference between standard-definition (640 x 480) and high-definition (1080p or 720p) video (although the difference between 1080p and 720p is much harder to spot). In addition to high-def resolution, keep an eye on frame rate: 30 frames per second looks smoother than 24 fps, and 20 fps looks choppy. As for file formats, AVCHD makes for more-compact files, but they’re more difficult to edit than the larger Motion JPEG variety.

• Wide angle: Wide-angle coverage is frequently overlooked, but it’s very important if you want to shoot landscapes or squeeze everybody into an indoor shot. Look for the 35mm-lens-equivalent figure: 28mm or lower is what you want.

• Maximum aperture: The flexibility to shoot indoors without a flash is a valuable capability, and the smaller the maximum aperture figure, the more light gets through the lens. Go for a maximum aperture of f/2.8 or lower. Anything over about f/3.5 is problematic.

• LCD resolution: You’ll be using that LCD to review your photos and, in many cases, to set them up. 230,000-dot resolution is the basic industry standard. Anything higher is better; 920,000-dot screens are like butter.

• Burst rate: Higher burst rate, sometimes called continuous shooting rate, is great for catching fast-moving kids or sports action. Point-and-shoots tend to be slow (often just over one shot per second), but there are exceptions. An SLR should offer at least three shots per second.

• Price: You don’t have to pay a lot to take decent photos; higher prices are usually tied more closely to more features than to readily apparent differences in picture quality, especially if you’re a 4×6-print shooter.

• Image stabilization combats the natural shake of your hand and the blurriness that can come with it. You want mechanical or optical image stabilization, not electronic. Some SLRs have stabilization built into the camera body; others require stabilized lenses to get this capability. If it’s in the camera, it helps fight blur with any lens you’re using.

• RAW-format images store exactly what the image sensor recorded, with no processing by the camera software, giving you complete editing flexibility on your computer without hurting image quality.

• Optical viewfinders are a dying feature on compact cameras, but you’ll be grateful to have one on a bright day when the sun glares on the LCD screen.

• Articulated LCDs are hinged screens that fold out and pivot around, nice for grabbing shots from odd angles.

• An HDMI-out port lets you connect the camera directly to HDTVs, useful for viewing both video and stills in all their high-def glory.

• Lens compatibility is going to be best for the Canon and Nikon camp, while Micro Four Thirds lenses (for certain Olympus and Panasonic models) are sparse.

• Manual-exposure controls give you hands-on control over your photographic efforts. The basic combo is PASM: program, aperture-priority, shutter-priority and full manual exposure modes. Beyond that, a world of fine control awaits for those who seek it out.

• Storage formats are pretty standard these days. SD cards and their high-capacity SDHC variant are very popular and economical, with CompactFlash the equally desirable standard for high-end SLRs. But think twice about cameras that take only Memory Stick or xD memory cards; they’re proprietary formats that are harder to find and more expensive per gigabyte.

• A touchscreen is an extra-cost feature that sounds like it should make operating the camera easier but almost never does.