Is The Future Of Whiskey Your Own Custom Barrel?

Maker's Mark has a new definition for BYOB Bourbon lovers the world over love to argue about what the best bottle of whiskey on the market is, but soon they might be able to make their own “perfect” bottle themselves.

Maker’s Mark, one of the world’s major producers of Bourbon whiskey, has introduced a unique program called Private Select that lets customers customize the flavor of a single barrel of whiskey in a process no one else in the industry is using. The result is that you can have a truly unique bottle of whiskey all your own–one day.

Whiskey drinkers love a special bottle of whiskey–and they’ll take any excuse to call something special. Over the decades of modern whiskey culture, whiskey makers have attempted to deliver on that demand by creating a rubric for special. Whiskey has been marketed based on its age, based on the size of the batch it’s created in, and most recently the trend has turned toward limited releases.

But all of the jargon really comes down to one promise: this bottle is unique from the others somehow. The demand for unique whiskey is so high that many whiskey makers now offer single barrel programs, the idea being that since every barrel of whiskey is unique, you can purchase the entire contents of a single barrel. Everyone from Jack Daniel’s to Macallan will sell barrels to buyers for the right price.

Barrel selection typically works like a produce market: the distiller (acting as grocer) lays out the best products, and you examine them (by tasting, in the case of whiskey) and pick a favorite from as many as a dozen barrels. They take the barrel, bottle its contents, and charge you for the number of bottles you get out of it.

The problem, of course, is you’re left with only what’s currently available to choose from.

Maker’s Mark’s program is a spin on that process with more control. The Private Select process lets you take staves (pieces of charred wood used in barrel making) and add them to the inside of the barrel, where the whiskey ages for 9 weeks with the new wood.

Whiskey gets most of its flavor from chemical interaction with wood. But those variables–the amount of char on the wood, the amount of time in the barrel, and the size of the barrel/amount of surface area in contact with whiskey essentially don’t change during the aging process.

Some distilleries will move whiskey to a second barrel (a process called cask finishing) with certain products, but until now consumers have never been able to decide what wood their whiskey gets finished in; that’s always been left up to the distiller. A selection of finishing staves ready for Maker’s Mark Private Select barrels. The staves are added to the existing barrel to add surface area, which the whiskey inside reacts with, causing flavor changes.

Maker’s Mark devised a plan whereby you select a handful of wooden staves to add to the barrel to change the flavor. You choose the staves based on flavor criteria–smoke, spice, caramel, vanilla–and your whiskey gets “flavored” the way all whiskey gets its flavor.

The process isn’t totally new to the company: Maker’s 46, which was released in 2010, is the result of this very process in action. But here’s where the change comes in: this process let’s you change the chemical makeup of the wood that the whiskey ages in. And that’s a lot of control the average drinker has never been able to exercise.

It’s also a numbers game. Right now Maker’s offers 5 oak staves designed by the company with varying degrees of char, and made of oak from America and France. You get to add 10 to the barrel, which means a total of 1,001 permutations exist for how to customize the whiskey. They haven’t even come close to trying them all.

If that makes you worried about picking the “wrong” permutation, don’t stress too much. Participants in the process get a lot of hand holding from the Maker’s Mark team, as well as the opportunity to sample existing blends, and whiskeys finished with each of the five stave types. In other words, you’ll know a lot more about what you’re doing by the time you make the choice than you would now. 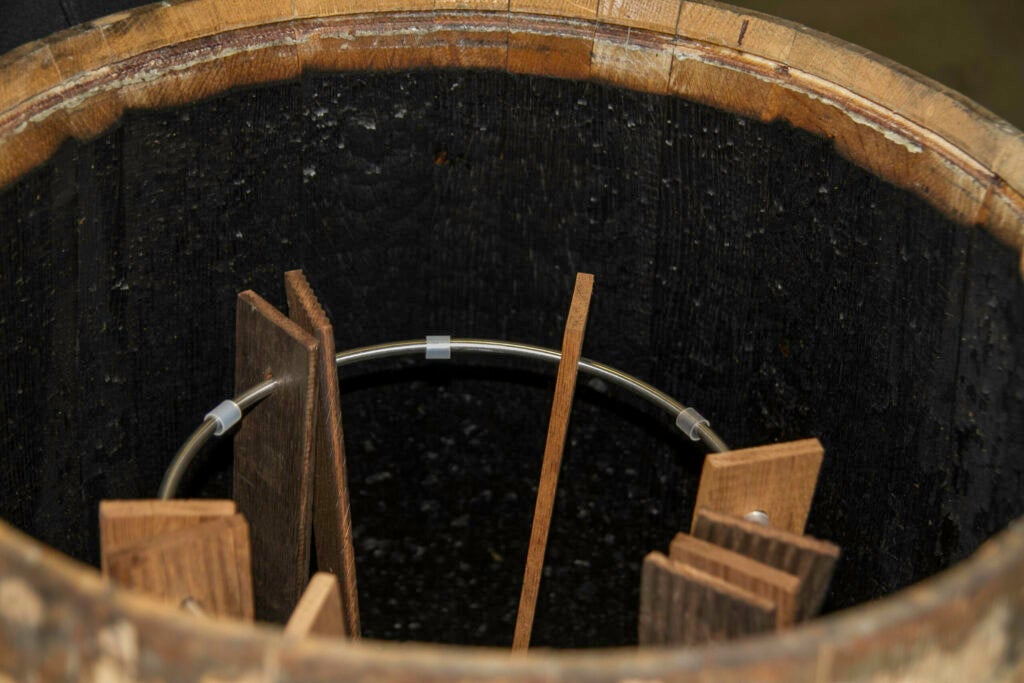 Staves are places inside of a Maker’s Mark Private Select barrel, where they rest submerged in whiskey for 9 weeks, changing the flavor profile drastically.

A quick reality check: the bottles will cost you $69 a piece, and a barrel can contain hundreds of bottles. So while the program may make your mouth water, it will make other things (like your wallet) hurt. They’re also not available to the average drinker, yet.

But it’s an option, for a price, we all may have one day in the future. Right now Maker’s Mark is building a new warehouse, ostensibly exclusively to house the Private Select barrels. For now, the major customers are restaurants and locations—places like Keeneland Racetrack in nearby Lexington, Jack Rose Saloon in Washington D.C., and a handful of Marriott locations around the country (disclosure, Marriott paid for a trip to Lexington for me to participate in a tasting of their bottling).

More restaurants, bars, and liquor stores will be making use of the program soon, so you’ll be able to see what other people are doing with the program for a few years, before they give the public a try. Unfortunately no one else has yet experimented with this level of customization, and there aren’t yet any programs worth mentioning that come close.

That doesn’t mean Maker’s has a corner on this particular process, and we may see more distillers doing similar things one day. But it wouldn’t work to copy and paste the process to another distiller anyway: Maker’s Mark has a unique recipe for their whiskey, and a competitor would have to take that into account, dramatically altering some or all of the process.

So until Maker’s Mark does decide to offer Private Select to the public, you’ll just have to drink bottles customized by bars, liquor stores, and restaurants.