Is Digital Nature as Soothing as the Real Deal?

Not even close, says a new psych study on plasma screen “windows” 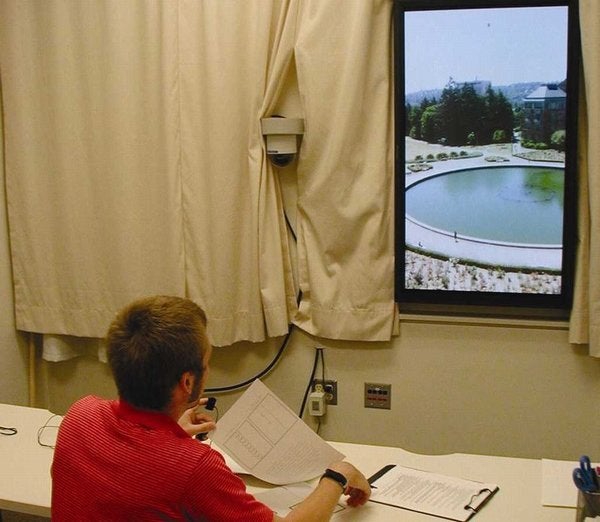 Discovery Channel addicts, get outside! HDTV may offer a vivid window on the natural world, but it won’t substitute for the real thing. That’s the implication from a new psychological study from the University of Washington’s Human Interaction with Nature and Technological Systems (HINTS) Lab, which found, in fact, that nature on a plasma screen is no more soothing than a blank wall.

The researchers set up participants in three office settings: one with a glass window on a natural vista, one with a 50-inch plasma screen playing a live HD video feed of the same scene, and a third with a blank wall. They noted how quickly the settings brought down participants’ heart rates after a stressful set of social interactions and cognitive tests.

The real window, as you might imagine, was the most restorative. The researchers expected the plasma screen’s ability to score somewhere between that of the window and the wall, but it ended up being no different than the latter. Furthermore, the longer the window-gazers looked outside, the more they recovered. The plasma screen had no such effect.

The medium, it appears, is the message. As digital technologies increasingly filter our environment, research groups like HINTS are investigating how direct and indirect experiences with nature can affect body and mind. “Humans will continue to adapt to an increasingly technological world,” say the authors in the paper, which appears in the current issue of the Journal of Environmental Psychology. “But are there costs to such adaptations in terms of human well being?”

Intuitively, we know that connecting with nature feels good. And a growing body of scientific evidence suggests that it really can make people healthier and more emotionally balanced. (Just read Richard Louv’s book Last Child in the Woods, an earnest look at the “nature deficit disorder” of today’s gadget-happy kids.)

One factor at play, say the HINTS researchers, is a process called “shifting baselines.” Simply, it means that due to ecosystem degradation, people today have a different perception of “nature” from people a generation ago, and a very different perception from the generation before that. The very idea of what is natural is subjective and changing over time as we adapt. As Jill Fredston writes in Rowing to Latitude, her chronicle of an epic Arctic paddling adventure, “When we do not miss what is absent because we have never known it to be there, we will have lost our baseline for recognizing what is truly wild.” Nature on screen is not wild, but will the next generation consider it so?

Technology is inseparable from the human experience. As we progress, studies like this will be increasingly useful to gauge how the tools—or more accurately, how we use them—can impact the toolmaker.