The future of the United States Air Force is a human-piloted, $100 million stealth jet guiding flocks of $3 million drones that glide effortlessly into position powered by turbo fans. Thanks to the Air Force Research Lab and drone-maker Kratos, that future of combined human/robot formation is already being tested.

There are many good reasons to want a human in the cockpit of a plane, including their judgement, fast-thinking skills, and the capability to respond to unexpected threats.

But there are hard physical obstacles that suggest maybe not every plane needs to have a pilot. Humans need systems to stay alive, and those systems sometimes break. Earlier this month, Air Force F-35As were grounded because the system supplying oxygen to pilots failed, and the F-22 struggled with oxygen problems for years as well. Another challenge is the gravitational force on a pilot from sudden and sharp maneuvers; there is an upper limit on how much force a human body can withstand before they black out and possibly die. Finally, there’s the simple calculation of the value of a human pilot—they’re expensive, and their deaths, compared to that of a robot, matter, so the incentives are all in place to make a plane that can keep pilots safe.

Not so when it comes to robots. The term d’art is “attritable,” which is Pentagon-speak for “cheap enough that it’s okay to replace it if it’s lost.” And Kratos has a lot of experience making drones ultimately built to be replaced.

“Our heritage from the beginning of time was to develop inexpensive airplane systems that are rugged enough to withstand the ground impact,” says Steve Fendley, president of the unmanned systems division of Kratos. “Targets are designed to be shot at, possibly even hit. Our target systems can take a missile strike to the wing that destroys the wing, deploy a parachute, land, and all we need to do is replace that wing. So you replace the components that are designed to be replaceable, and very inexpensive, and then fly again.”

The primary target drone Fendley is talking about is the BQM-167 aerial target, which can cost between $750,000 and $900,000, depending on the options selected and the size of the order. That body is the basis for the Mako, one of two combat drones designed and built by Kratos. The Mako can fly at altitudes anywhere from 20 feet to 50,000 feet, at up to 690 mph, and with a maximum range of 1400 nautical miles (or 700 miles each way on a round trip). Depending on the size of the order, it will cost between $1.5 and $2 million, according to Fendley.

Like the target drone it’s based on, the Mako uses rocket-assisted takeoffs to get airborne, instead of traveling down a runway. That requires a launch space in the 10s of square feet, so several Mako drones could presumably be launched from a small area. And the drones are geared for combat. The Mako can carry payloads internally, on wing stations and on wing tips. Payloads could be anything from fuel tanks to extend its range, bombs intended for targets on the ground, and even air-to-air missiles. And it can do aerial maneuvers at up to 12 Gs, beyond what a human pilot can endure without losing consciousness. 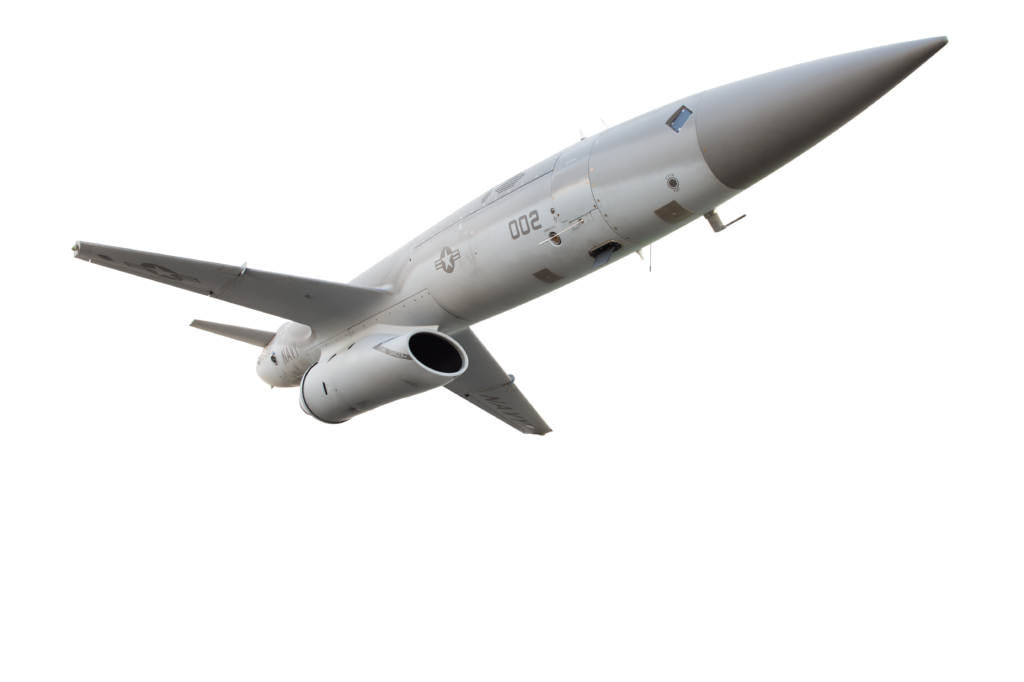 Based on the existing BQM-167 aerial target, this drone can maneuver at forces that could kill a human pilot

“Valkyrie” is the larger of Kratos’ combat drones, and depending on the options selected and the size of the order, it could be produced for a unit cost of between $2 and $3 million each. The Valkyrie isn’t as fast as the Mako, though by no means slow: it has a top speed of 650 mph. It can cover a range of over 3,000 nautical miles while carrying a standard payload, or more than enough to fly from Los Angeles to Boston. Powering the Valkyrie is a turbofan engine, like those typically found in business jets, which makes it more fuel-efficient than the turbo-jet in the Mako. It can fly at altitudes between 50 feet and 45,000 feet. It has a wingspan of 22 feet and a length of 29 feet, making it about 20 feet shorter and 10 feet narrower than the F-16 Fighting Falcon. Both Mako and Valkyrie can deploy parachutes at the end of their mission, gently falling to the ground for recovery and repair, ready to perform another mission.

Oh, and it might just drop a swarm of small drones from the internal bay that runs most of the plane’s length.

That bay can carry “anything from weapon systems to UAVs,” says Fendley. “It can carry, let’s call it a volley of small UAVs, and it can deploy those UAVs to either be its wingmen or to go conduct a mission of their own.”

“Drone” is a big category, and it includes everything from plane-sized vehicles like the Valkyrie to much smaller quadcopters. The biggest advantage of small drones is that costs allow for great numbers. The biggest weakness is limited flight times and ranges, so a big drone that can carry many small drones in its belly and unleash them when needed is a best-of-both-worlds scenario. The Air Force, aware that it needs a cheaper way to deal with threats, is looking seriously at small drones as a way to stop missiles or launch aerial attacks.

In 2015, DARPA released a concept video showing drones, stealth fighters, and cargo planes working together to attack enemy defenses. Expendable drones scout ahead, and relay information back to the stealth fighter. That stealth fighter, in turn, relays information to a decidedly conspicuous cargo plane, which releases drones and missiles to hit targets. While none of the planes in the concept are explicitly named, it’s easy to see a Kratos Valkyrie fulfilling the role of the drone, an F-35 as the stealth fighter, and a C-130 as the cargo plan. If the Valkyrie itself could release an additional swarm of smaller drones, an air defense system built to tackle large planes could be overwhelmed.

The Air Force is already working on drone swarms, which fly together as a loud, buzzing, autonomous unit, like especially large, mechanical bees. The swarm is a future potential, one the Air Force is exploring but not yet in a useful, military form.

Individual combat drones like the Mako and Valkyrie are much closer to realization. In 2015, the Air Force sent out a request for “Low Cost Attritable Strike UAS Demonstration,” which is the cheaper combat drone program that ultimately led to the Kratos Valkyrie. Besides a small price tag, the Air Force wanted “long range, high speed strike capability in remote regions where forward basing is difficult or prohibited,” perhaps thinking of a future where runways won’t always be available but air support is still required. In 2016, Kratos won the $40.8 million dollar contract to develop the vehicle, which lead to the Valkyrie. Notably, the contract required a vehicle that could do “defensive counter air manoeuvres, offensive counter air manoeuvres, the suppression of enemy air defences and the destruction of enemy air defences,” or tasks in the past performed by versatile fighter-bombers (in modern military parlance, a “strike aircraft”). Valkyrie model in a wind tunnel

An air intake on top of the Valkyrie makes room for an internal bomb bay on the underside of the drone.

Fighting other aircraft is well beyond the abilities of drones used by the Air Force today, though DARPA’s been looking for input on drones that could win air-to-air combat since at least 2015. Which leads to the fundamental question of any autonomous or semi-autonomous system: how, exactly, does it know where to fly, and more importantly, when to kill?

Fendley compared lethal decisions in a combat drone to the military chain of command in a large weapon system, like the guns of a ship or a missile battery.

“Typically there is a chain of command,” says Fendley. “In our autonomy system, you have gates of decision-making. There are certain functions, like deploying weapons is one of them, where a system has everything it needs to be prepared up through that point and when it gets through that point, it holds for for human approval for that last command.”

For example, the drone can fly into position, aim at a target, and then stay on target without firing until a human approves the command to fire. And this gated control system isn’t limited to lethal decisions. If the drone has to fly over sensitive airspace, for example, it could send a request for human approval to pass through that boundary, and wait until it gets the okay to do so, or receives a different order.

There are options when it comes to the human that’s in control. It can be a fighter-pilot communicating through a special tablet over a tactical military network, or a passenger sitting in the back of a military cargo plane, overseeing the drones escorting the flight and giving them specific orders when needed. Most of the time, the drones will automatically track and match the actions of the human-piloted plane. The drones fly the exact same path of the plane, offset by some distance in three-dimensional space for safety.

“A year and a half ago, we actually flew in formation with a Harrier [fighter],” says Fendley. “Hands-off, no data-link on the ground, our tactical aircraft system was operating solely on the tactical network system which the Harrier had, positioning and flying that airplane 100 percent autonomously.”

This is a straightforward example of a “manned/unmanned teaming,” where human-piloted aircraft and autonomous machines work seamlessly together. It could be one-to-one, with each fight matched to a drone, or it could be several drones flying in formation with the piloted aircraft, several cheaper drones amplifying the fighting power of the initial aircraft while only minimally increasing the costs involved. At $3 million each, a Valkyrie drone isn’t cheap by most standards, but it’s a lot easier to send into a messy situation than the F-35A fighter jet, which costs the Air Force 30 times as much.