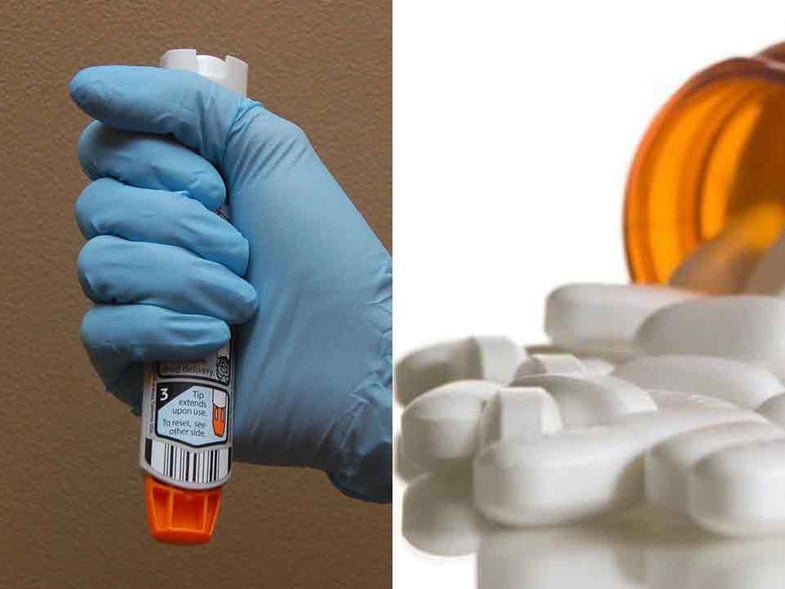 Expensive EpiPen auto-injectors dominate the market for emergency allergy treatment, but a cheaper alternative is now being developed: an epinephrine tablet that dissolves under the tongue. Greg Friese via Flickr (CC by 2.0, changes were made), U.S. Centers for Disease Control and Prevention
SHARE

Last month a congressional committee tore into Mylan CEO Heather Bresch. The charge: jacking up the price of EpiPens, her company’s signature product. Those price hikes left some allergy sufferers without access to emergency epinephrine, the drug that saves people who go into anaphylactic shock.

Mylan has control of the marketplace because other companies have a hard time competing with the EpiPen’s patented design. Those who have tried have mostly offered up alternative types of auto-injectors, which generally flop.

But one small group of researchers has been working on a completely different method of delivering the medication. An oral epinephrine tablet, if it can get approved, would bypass patent woes—and might solve a host of other issues as well.

Scientists have long known that epinephrine is useless when swallowed. That’s because the hormone, which occurs naturally in the body (it’s the same thing as adrenaline), breaks down in the stomach and liver before it can hit the blood stream. But Mutasem Rawas-Qalaji, a pharmaceutical researcher at Nova Southeastern University in Florida, thinks he has found a way around that.

He designed a pill that works a bit like an orally disintegrating tablet, or ODT. ODTs are meant to be held on top of the tongue until they dissolve, like a breath mint. As an alternative to standard pills and drugs in liquid form, these tablets are great for people who have trouble swallowing. But they are also a way to deliver medicine orally without getting the digestive tract involved. In Rawas-Qalaji’s version, the tablet would be placed under the tongue so that it would dissolve directly into the blood-rich area at the base of the mouth. Like an injection, the drug would be delivered straight to the bloodstream.

For Rawas-Qalaji’s tablets to work, they must disintegrate quickly. He has spent the last few years making smaller and smaller crystals of epinephrine so that the tablet will crumble and be absorbed within seconds. Still, it’s a less efficient method than an injection straight to the muscle, because a lot of the drug gets lost in the mouth. The EpiPen contains 0.3 mg of epinephrine, but to deliver an equivalent dose, the latest version of the tablet is packed with 20 mg. 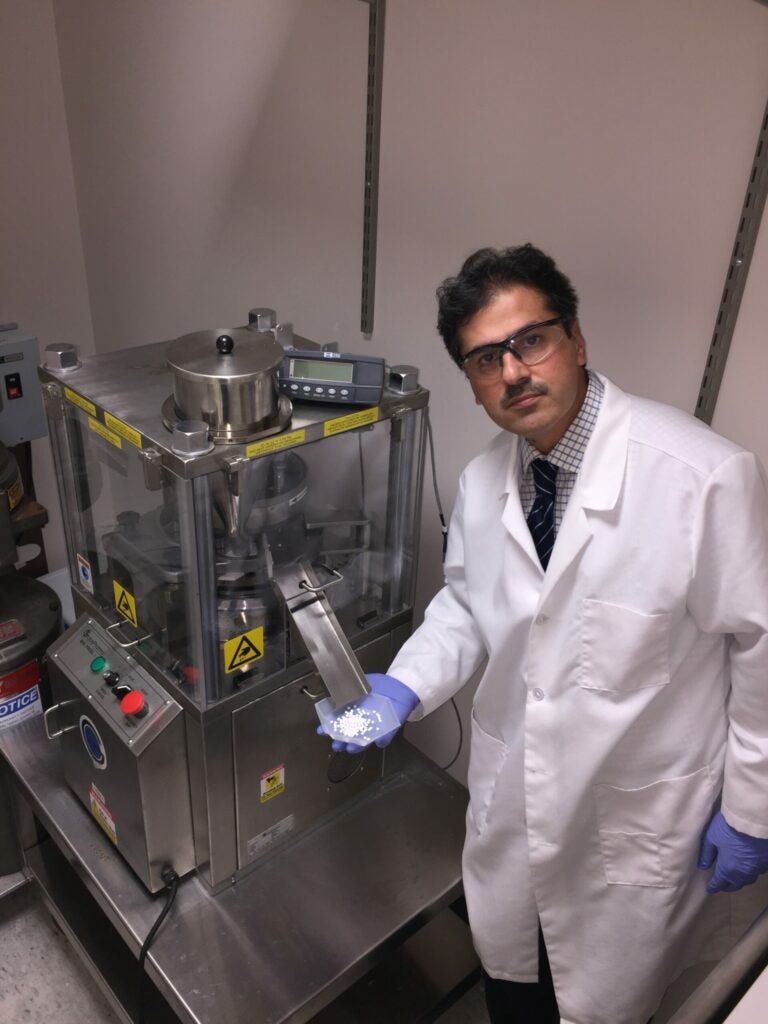 Rawas-Qalaji collects compressed tablets from a Minipress machine. The tablets have to be packed with medicine and crumble instantly under the tongue.

EpiPens have their own flaws, however, even for people who can afford them. In a study published last year, only 16 percent of patients used the device correctly. Most failed to jam it hard enough into their leg or didn’t hold it in place for the recommended ten seconds.

Plus, the devices are bulky, and they expire after about a year. Not only would the tablet be smaller and more portable, but it would probably be more stable as well, Rawas-Qalaji says. He estimates the tablets could be good for up to seven years. “So if you don’t use them you don’t have to go and buy another one,” he said.

If it worked, the epi tablet could be a game changer for people with severe allergies. But it’s premature to get excited, says Robert Wood, an allergist at Johns Hopkins.

To be sure that the tablet would work, it would have to be tested in people actually experiencing anaphylaxis, Wood argues. That would mean convincing volunteers with severe allergies to intentionally expose themselves to their allergic trigger and hope the new drug works. That’s not likely to get past the average review board, he says.

Rawas-Qalaji agrees that such a scenario would be unethical and unfeasible. So far, he and his team have only tested the epi tablet in rabbits. To see how humans react, they want to give the tablet to healthy volunteers and then measure the concentration of the hormone in their blood. If it’s equivalent to blood samples from people given the EpiPen, it should work just as well to stop anaphylaxis. Studies that examine alternative injection sites or varying doses of epinephrine have been conducted this way.

Wood pointed out that the swollen mouth of a patient in anaphylactic shock might absorb epinephrine differently than a healthy mouth. This is a possibility that Rawas-Qalaji has also considered. “The swelling and other related unanswered questions have been discussed with FDA,” Rawas-Qalaji said in an e-mail. “We had a good agreement of what can be tested and what [can]not.” With input from the FDA, and consultation with an allergist, Rawas-Qalaji and his team are planning to start clinical trials sometime in the next few years.

As for the price, Rawas-Qalaji says that’s up to whatever manufacturer takes this project on. But he’s optimistic that the tablets can be sold “at a price that’s affordable and makes sense,” he says, “to fill a gap and meet the needs of the patients.” He hopes to get FDA approval well before Mylan’s patents are up in 2025.