Millions of Americans can’t stay home with the flu, so it spreads

In America, paid sick leave is not guaranteed. 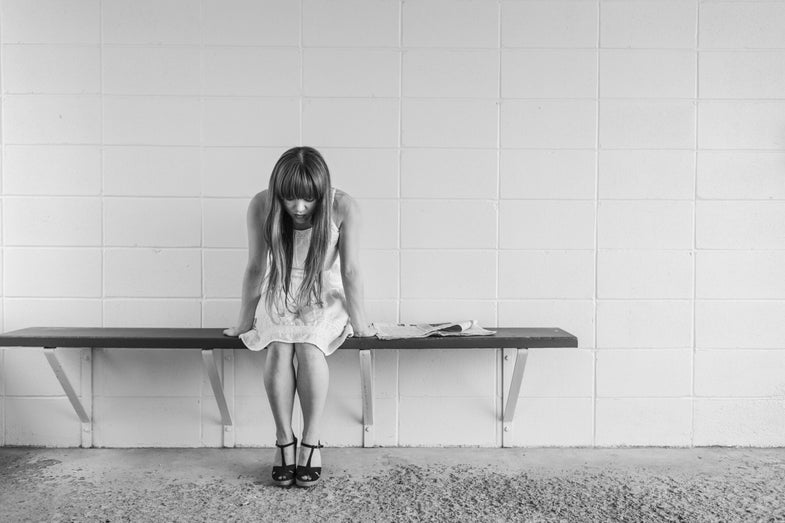 For 20 million Americans, staying home sick is a luxury. Every year, that many people go to work with a virus or infection because they don’t have paid sick leave, even though research shows that staying home prevents the flu from spreading. And during a nasty flu season like this one—we’re now likely in for a record-setting year—doctors and public health officials urge Americans to take every precaution they can to avoid spreading the potentially deadly virus.

“For those who are already sick, please stay home from work or school,” acting director of the Centers for Disease Control Anne Schuchat urged on a recent call with reporters. “That is such an important recommendation to follow. Otherwise you run the risk of spreading the virus to others—and what may be mild symptoms to you could be deadly to someone else.”

But in reality, as scientifically sound as this reasoning may be, taking unpaid days off for whatever reason, is simply not an option for many Americans. The United States is the only wealthy country that doesn’t guarantee paid days off for illness. That leaves it up to companies to decide whether to dole out the benefits, which often means that upper-level employees at large companies get paid sick leave, but low-wage workers often don’t. And those are exactly the people who can’t afford to take days off.

More than 83 percent of Americans in the top decile of earners in their occupation get paid sick leave, but only 23 percent get that benefit in the bottom 10 percent. That’s according to a 2009 report from the Center for Economic and Policy Research (CEPR). Overall, they estimate that at least 40 percent of private-sector workers don’t have paid days off if they come down with an infection like the flu. Some more recent estimates by the Bureau of Labor Statistics suggest that the overall numbers have increased to 60 percent, in part because of policies enacted by the Obama administration to protect government contractors, but that the vast discrepancies between high- and low-wage workers still exist to the same extent.

Perhaps the question of allowing people to stay home (and likely watch hours of daytime television) doesn’t concern you. Well, it should. Research shows that the isolation of staying home, regardless of the TV-binge watching that may come with it, helps keep everyone else from getting sick themselves. That’s why the CDC promotes it as a method of preventing influenza. The flu, like all viruses, can only spread if we, the carriers, allow it to. We can’t instantly isolate everyone with influenza, but we can promote staying home.

And it’s not just your co-workers you should be worried about. If you get on the bus or touch a gas pump while you’re infected with influenza, you risk spreading that virus to people who are likely at higher risk than you are of dying from the flu. The elderly and the very young have weaker immune systems that aren’t as resilient to viral infections. It’s really them that we’re trying to protect with the flu vaccine.

A healthy young adult isn’t likely to die from influenza. But that person’s grandmother is, and she’d be at a lower risk of contracting the virus in the first place if we all stayed home when we felt ill. That same CEPR report found that “nursing homes that provide their employees with paid sick days have lower rates of respiratory and gastrointestinal illness among the patients they serve.” What’s more, entire countries that offer paid sick leave have better prospects come flu season.

Germany has a particularly generous sick leave mandate that dates back to 1883, when Otto van Bismarck, the famed first Chancellor of the German Empire, implemented the Sickness Insurance Law. It provided 13 weeks of paid sick leave. And yet in 2018 the United States government, by law, still doesn’t guarantee a single sick day to its people.

The answer to the obvious question—why doesn’t the U.S. guarantee sick days—is a complex mixture of World War II politics, American individualism, lobbying, and a host of other social and economic factors that merit their own book. Suffice to say that it’s not just that the federal government doesn’t care.

When researchers at the National Bureau of Economic Research compared Germans to Americans, they found that influenza-like disease rates dropped significantly when people had access to paid days off. In fact, even within the U.S., the trend held up. Seven major American cities have what the NEBR qualifies as just “relatively comprehensive” (still nothing compared to the Germans). By their calculations, those cities prevented 100 cases of flu-like illness per week and per 100,000 people.

Think how many cases we could prevent with widespread paid leave. In the 2009 H1N1 pandemic alone, estimates suggest that around 5 to 7 million more people got the flu from someone who came to work sick, and that an additional 1,500 people died.

Some employers have, of course, complained that they couldn’t possibly afford to provide such generous benefits, but research suggests they might gain more that they’d lose if they did provide it. According to the CEPR report, “Firms that provide paid sick days and leave tend to have lower job turnover rates, lower recruitment and training costs, lower unnecessary absenteeism, and a higher level of productivity than firms that do not offer these kinds of benefits.” They specifically note that this is because people can’t work at full capacity when they’re ill, and that trying to push through an illness often just make the condition worse, resulting in even more time off.

Americans deserve paid sick leave every year, but since we’re in the midst of perhaps the worst flu season on record we can appreciate it even more right now. Just two years ago, Tom Perez and Margot Dorfman, then the U.S. Labor Secretary and CEO of the U.S. Women’s Chamber of Commerce respectively, argued that access to paid sick leave isn’t just good public health policy or good business. It’s “a moral imperative.” That was after President Obama called on Congress to enact it (though unfortunataly, nothing came of it) for all people and the American Medical Association officially supported paid sick leave as a matter of public health.

We could have prevented some of the heart-wrenching deaths that everyone has read about in the last month. We just needed to give people a few days off.