These Tiny Satellites Will Record An Asteroid Strike In 2022 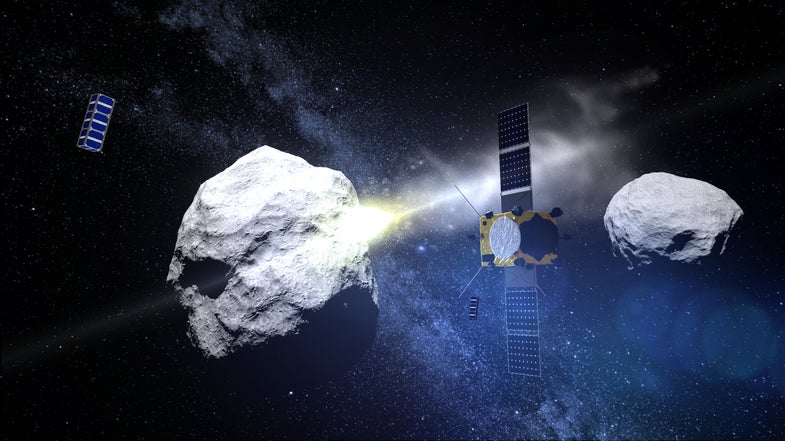 Earlier this year, the European Space Agency (ESA) announced it would let a handful of small, realtively cheap CubeSat satellites hitch a ride to an asteroid system. And now, the space agency says it has chosen five candidates that have a chance to snag a front-row ticket to an asteroid impact in 2022.

The CubeSats will be ferried up to a binary asteroid system (Didymos and the smaller Didymoon) about 6.8 million miles from Earth. Once they reach their destination about two years later, they’ll be working with ESA’s Asteroid Impact Mission (AIM) craft and the NASA-led Double Asteroid Redirection Test (DART). The idea is, as AIM and DART get to work analyzing and ultimately, ramming into Didymoon, respectively, the 10-centimeter CubeSats will be monitoring the asteroids as well.

In a statement, ESA says the CubeSat proposals they’ll be investigating for the trip will be “taking a close-up look at the composition of the asteroid surface, measuring the gravity field, assessing the dust and ejecta plumes created during a collision, and landing a CubeSat for seismic monitoring.”

“AIM has room for a total of six CubeSat units,” Ian Carnelli, managing the mission for ESA said in a press release in February. “So potentially that might mean six different one-unit CubeSats could fly, but in practice it might turn out that two three-unit CubeSats will be needed to produce meaningful scientific return.” And ESA notes that these CubeSats could potentially be the first to travel beyond Earth’s orbit.

Both AIM and DART make up the two pieces of the Asteroid Impact and Deflection Assessment (AIDA) study. Once AIM arrives at the asteroid pair, it will investigate the asteroid surface, measure the gravity field, monitor seismic activity, and analyze the ejecta plumes caused by DART’s collision with Didymoon.