Kleptogenesis gets a little less mysterious in a new study. 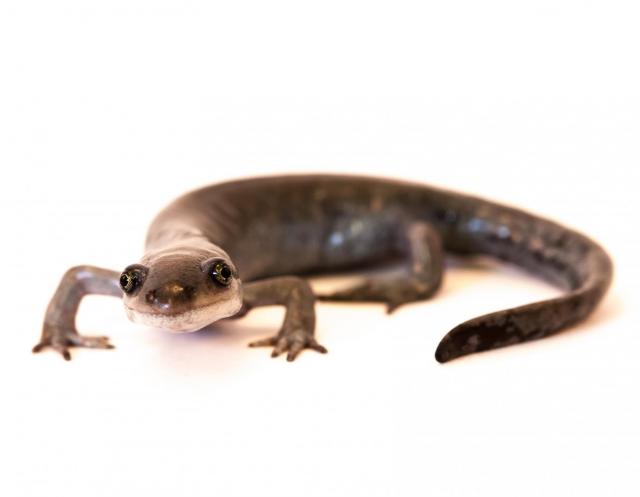 Imagine a lineage made up solely of women. Generation after generation, these females pilfer genes from males—not mating and reproducing in the usual way, but using sex as a means to collect genetic material that they can parcel out to their offspring in seemingly any configuration. A few genes here, a few genes there, generation after generation. It’s not some Themyscira-esque fantasy: some lady salamanders have been carrying on this way for millions of years.

The strange reproductive behaviors of the genus Ambystoma aren’t new to science. Researchers have known for some time that one lineage of these animals—a line of salamanders that only ever have female offspring—persist by collecting the genetic material of males from several other species in the genus. But in case this is your first time encountering the fantastical world of “kleptogenesis” (side note: great word), here’s a run-down.

Many members of the salamander genus Ambystoma are sexual creatures—by which we mean males drop sperm packets to fertilize female eggs, producing offspring with a set of genetic instructions from each of their two parents. But unisexual Ambystoma lizards do it better. These females pick up those packets, but they can gather more than one with which to fertilize their eggs. And once they do, it seems to be up to them to decide which parts of the genome—if any—they use from each of their mates.

“Most vertebrates that reproduce in ways that involve only females end up being sperm-dependent in one way or another,” says Maurine Neiman, associate professor in biology at the University of Iowa. Many of those lineages become “sperm parasites”, requiring sperm to penetrate their eggs in order to trigger development into embryos. They need that sperm to get things going, but they throw the genetic material away—essentially creating clone daughters while obeying the reproductive mechanics developed by their sexually reproducing ancestors.

“Superficially, these salamanders seem to have a lot in common with those other females,” Neiman says. But in fact, their “bizarre” method of reproduction has never been documented in another animal. And it’s kept them alive for much longer than other methods of makeshift asexual reproduction.

“They have the same dependence on sperm, but they also keep the genomes—or some of them, anyway—of the males they mate with,” she explains.

The female salamanders seem to be able to dole out genes to their daughters in all sorts of configurations. Individuals are basically salamander hybrids made up of the DNA of a variety of species, unified by common mitochondrial DNA (which a mother passes directly to her children, with no male input) from an ancient ancestor. Some carry five unique genomes around in the nuclei of their cells. They appear to always carry at least one copy of the A. laterale genome (the blue-spotted salamander), even though this species doesn’t seem to be the one from which they all descend. Scientists still don’t know how a salamander “chooses” what genes to give her daughter, but they know that mom can basically make whatever kind of Franken-mander she desires.

In a study published recently in Genome Biology and Evolution, Neiman and her colleagues at the University of Iowa and The Ohio State University—led by a graduate student from each lab—tried to puzzle out what the heck a salamander does when spoiled for gene choice. And they were fueled by more than just herpetological curiosity.

“We’re interested in the broader question of why genomes are organized as they are in most animals,” she says. “We typically have two copies. Why is that? We don’t have a good understanding of that. And in biology, one way to get at a question is to look at something weird. You can sometimes understand the typical by figuring out how the exception to the rule works.”

The little lady her team studied was definitely an exception to the rule: she carried three genomes, making her a “triploid” organism. Analysis of her DNA revealed that most of the genes taken from males of other species—Ambystoma laterale, Ambystoma texanum, and Ambystoma tigrinum—had been expressed equally. Genes make us who we are by instructing our cells to make certain proteins at certain times, contributing to specific bodily structures and processes. We say a gene is “expressed” when it’s allowed to do the thing it’s meant to do, leading to some physical result. If you’ve got multiple genomes kicking around, you probably have genes that don’t need to be turned on—they might be duplicates of a gene from another source, or even produce proteins that conflict with those made by different genes. According to the new study, while a salamander seems to pass her ill-begotten genes down in all manner of assorted mixtures, her daughter is likely to use the resulting genomes pretty equally to dictate her bodily functions. That’s unusual in the world of hybrids.

“That surprised us,” Neiman says. “When you have hybrids, you usually think one genome is going to be used preferentially while the other is shut down. But these questions are typically asked in the context of plant hybrids.” Many of the crops we grow today have been hybridized so much throughout their evolutionary history that they now carry many genomes; wheat has six copies of each of its seven chromosomes. Scientists know an awful lot more about plant hybrids than strange critters like these salamanders, Neiman says, but it’s possible that a better understanding of how the extreme gene swapping works could help us breed better crops in the future.

“You start to wonder if this ability to have so much genomic flexibility set them up to be able to use their bizarre method of reproduction,” she says. “Does this mean that in general, animals are more flexible about genome use than plants?” Answering that question could help us understand more about how the two kingdoms evolved.

It could be that this balance is key to keeping the (kind of absurd) method of procreation going. “If you have a team that’s unbalanced and loses a top player, you won’t win,” Kyle McElroy, a graduate student in Neiman’s lab and the paper’s corresponding author, said in a statement. “But if every player is equal, then you don’t lose as much.”

Neiman and her colleagues can’t be sure whether the genome equality persists as things get more crowded. The follow-up study that’s “just crying out to be done,” Neiman says, would be to examine a salamander with even more genomes—some females are born carrying a genome from five different species of Ambystoma. More study is definitely needed to suss out these strange salamanders.

The promiscuity of Ambystoma can be hard to wrap your head around if you think of species in the way most of us learn about them in school: individuals that can reproduce with one another. Hybrids like the unisexual members of Ambystoma muck that all up: they actually need to mate with multiple species in order to avoid extinction. And far from being sterile mules, their daughters continue to exhibit the incredible ability to steal and reconfigure genes for generation after generation. But Neiman says that the creatures are just one example of how fluid biology truly is.

“You’re talking to an evolutionary biologist who thinks a lot of the talk about speciation is just hype,” she says. “We’re humans, we like to put things in categories. But I’m not crazy about the idea that species are concrete in biology, outside of human context. Defining a species is useful in terms of research, but I’d say these salamanders demonstrate the messiness of biology and evolution—the fascinating and complicated reality that remains when you take the human need to put things into neat categories out of the picture.”