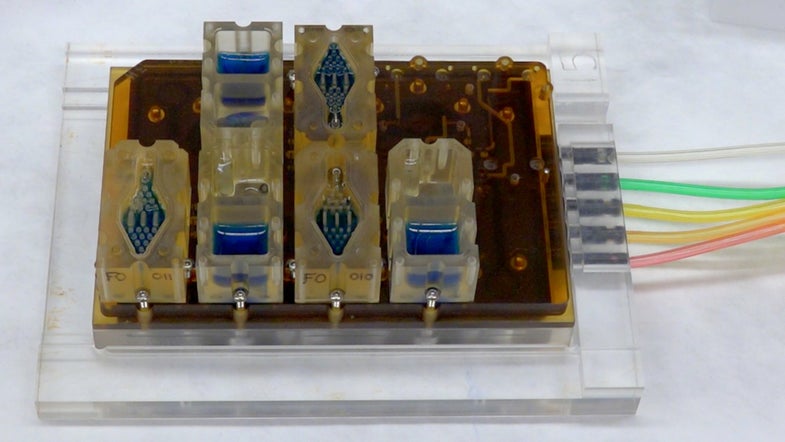 The best way to understand the human body—and the drugs that we put inside it—is to study organs as their cells are thriving, breathing, and multiplying. But you can’t really do that when those organs are inside real, living humans. So for the past few decades, researchers have been creating “organs-on-a-chip”—tiny Petri dishes of cells that function similarly to the intended organ of study. And they’ve had pretty good success. But designing a system that involves a handful of organs—like the female menstrual cycle—has been much more difficult to replicate in a lab.

But in a report, funded by the National Institutes of Health, out this week in the journal Nature Communications, researchers have figured out a way to integrate cells from every organ involved in the menstrual cycle into one fully-functioning unit—all on a single Petri dish. Once perfected, this technique could help researchers better understand the steps involved in this system, as well as what to do when these processes go wrong.

“These interacting organs are part of normal physiology,” says Teresa Woodruff, lead researcher on the study and a professor of obstetrics and gynecology at Northwestern’s Feinberg School of Medicine. But until now, they’ve been difficult to model. This new system allows scientists to study the menstrual cycle in a much easier way.

The idea behind an “organ-on-a-chip” is to mimic exactly how a human organ or system of organs works in the body, on a chip that can be manipulated in a lab. Researchers can then test the effectiveness and safety of new drugs in the lab organ before they’re tested in a living human. The closer the lab organ is to the real thing, the more certain researchers can be of how a drug will work. But birth control pills, for example, work on the entire reproductive system—the ovaries, fallopian tubes, uterus, and cervix—as a whole. Woodruff and her colleagues knew that in order to study the effectiveness of contraceptives in a lab, they would need to create a similar multi-organ reproductive system.

While scientists have already created other organs on a chip (including brains, hearts, and lungs) no one had created a system that incorporated all the organs involved in female reproduction. To do this, the team started with ovarian tissue, and then, one by one, began incorporating further organ cells until they had a fully-functioning system able to mimic the hormonal and physiological processes involved in one 28-day reproductive cycle.

The researchers now plan to study not just the effectiveness of contraceptives, but also their interaction with and effect on other tissues and organ systems in the body, like the cardiovascular system as well as bone density and bone health. They can do this by replacing a small number of cells in their new system with cardiac cells or bone cells to see how these tissues hold up against the hormone cycle.

There are so many systems that are affected by the hormonal cycle, Woodruff says. A perfect example of this is the gastrointestinal tract. Similar to the reproductive cycle, the GI tract changes dynamically in response to hormones as they fluctuate through a 28-day cycle. “Inflammatory bowel diseases, like Crohn’s Disease, these are really persistent problems for which we have little understanding,” Woodruff says. Studying the interaction between this hormonal cycle and the GI tract could lead to a better understanding of how the gut works and how hormones influence the guts of someone with gastrointestinal diseases.

In the future, the researchers want to create a similar system for studying male reproductive organs, Woodruff says, as well as extend the number of days they can study the female reproductive cycle, which would help them better understand hormonal effects on other systems. “[Initially], 28 days seemed like an absurdly long period of time,” says Woodruff. “Now that we are there, we are really anxious to push the system to the limits.”