The FDA says ecstasy is a ‘breakthrough’ drug for PTSD patients

It's a big step forward for a controversial treatment. 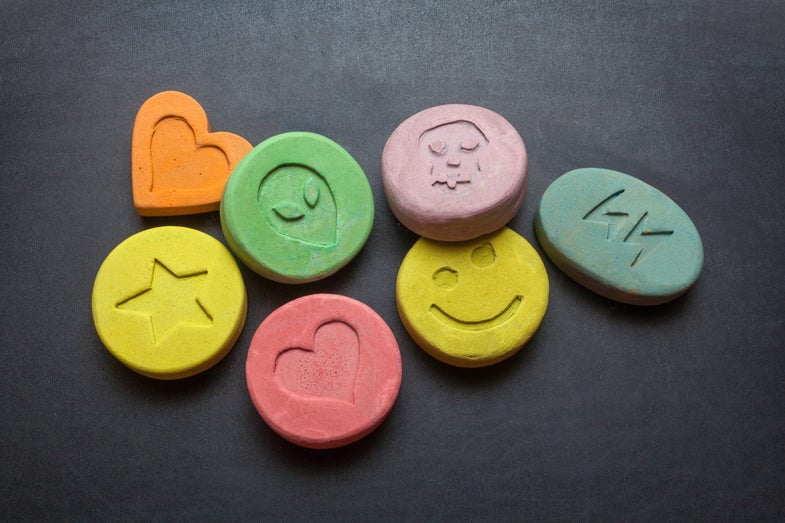 Ecstasy doesn’t sound like something you do in a doctor’s office. But the Food and Drug Administration wants that to change. The FDA just approved the substance, more clinically known as MDMA, as a ‘breakthrough’ drug—and will work to move it through clinical trials as efficiently as possible.

The FDA only grants breakthrough status when a medication (for a serious disease) is likely to offer significantly better results than currently available treatments. It may seem wild that the same drug that EDM lovers take at raves is going to help soldiers recover from war-related trauma. But if you know how MDMA works, it shouldn’t come as a surprise.

Ecstasy makes you feel great, and that’s why it’s such an effective therapy

Once MDMA gets into the bloodstream, it prompts a massive release of serotonin, dopamine, and norepinephrine. The collective efforts of all three neurotransmitters make the user feel euphoric, giving them a heightened sense of empathy and of physical sensations. A loved one’s touch suddenly feels like it transmits their love directly through your skin. Rhythmic beats and aesthetically pleasing sights become completely enthralling. That’s why people take it at raves—it amplifies all the positive sensations they feel when they listen to music and dance.

That’s the same reason that it works so well for PTSD patients. On MDMA, the user’s brain is flooded with all the neurotransmitters that make them feel good, and that can make it a lot easier to recall painful memories. Biologically speaking, every time you engage a memory, you’re re-experiencing it. The set of neurons that encodes that memory are all firing the same way they did when the memory formed. But that means you might have an opportunity to revise the memory every time you recall it: because the original neurons are firing, they’re more susceptible to making new connections or strengthening old ones. A fearful memory will stay fearful you experience the same fear all over again whenever you recall it.

MDMA could help rewire that memory. While high on ecstasy, patients don’t feel the same pain when resurfacing a scarring memory. It becomes much easier for people to deal with those experiences with their therapist when they’re not fighting visceral fear. MDMA helps patients have more productive conversations about past trauma with their therapists.

MDMA can give relief to patients for whom nothing else has worked, and with minimal risks

In one study, 67 percent of PTSD patients had no signs of the disease after three MDMA therapy sessions. Just 23 percent of non-MDMA-assisted patients had the same results. Another long-term study followed 16 people who had PTSD that was unresponsive to all other therapies. Of those, two had relapses and the rest were considered clinically cured (meaning their score on a clinical evaluation fell below the minimum needed for PTSD diagnosis). Those improvements lasted for years after treatment.

Not all psychologists like the idea of using MDMA as a therapy tool. Plenty of them see it as unnecessary, or argue that the sessions you get while high on molly aren’t structured enough to be useful clinically.

Some people also argue that ecstasy could be harmful to the brain’s structure in the long term. Several studies in the past showed detrimental effects in chronic MDMA users. A follow up study in 2011 argued that those other experiments were flawed. They all looked at MDMA users without considering the fact that lots of molly fans are also likely to use other illicit drugs, and drink more alcohol than average. When researchers limited the scope to people who used only MDMA, they found no signs of long-term damage from the drug.

Certainly MDMA won’t work for everyone—no treatment does. It may not be the first line therapy, and instead be reserved for particularly stubborn trauma cases. It might only be prescribed to specific subsets of patients, and likely only for use in the presence of a licensed therapist. Regardless of the eventual details, the results have clearly gotten the FDA’s attention. Breakthrough status is reserved for very promising therapies, and they don’t hand out the designation lightly. It indicates a strong motivation to get the drug to market, and MDMA could be in the hands of therapists across the U.S. in the very near future. And whether or not you think that illicit drugs should be used in psychotherapy, the results suggest that such a move could help millions of Americans who suffer from PTSD get their lives back.