FDA Approves Use Of Engineered Herpes Virus To Treat Cancer

The first of what may be many virus-based treatments 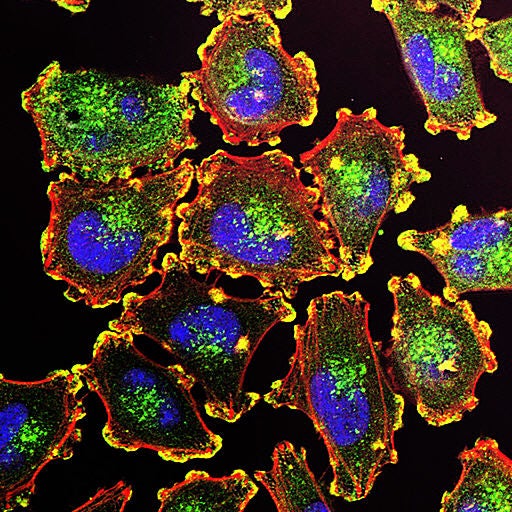 Yesterday, the Food and Drug Administration (FDA) announced that it had approved the drug Imlygic to treat late-stage melanoma on the skin and lymph nodes. The drug, which relies upon a genetically engineered herpes virus to attack and kill the cancerous cells, is the first virotherapy drug to gain approval, buoying researchers’ hopes that more will follow.

Since the 1800s, researchers have noticed that viruses could cause patients’ tumors to shrink or grow, but they weren’t sure why or how this happened. In recent years, scientists figured out that genetic tweaks to a virus could cause them to preferentially infect and kill cancerous cells without affecting the nearby healthy cells. And while malignant cancers often slip by the immune system, the virus’ presence ignites the immune response. Combined, these reactions mean that virology can successfully treat even some late-stage cancers that are often resistant to other treatment methods.

Before it was approved, Imlygic was tested in more than 400 patients with metastatic melanoma, which kills about 10,000 people per year in the United States, which had caused lesions in patients’ skin or lymph nodes. When the drug was injected into the cancerous sites over the course of six months, more than 16 percent of patients saw their lesions shrink.

So far, virology treatments haven’t worked as well in cancers in tissues deeper in the body—the drug has to be injected directly into the tumor site or the immune system will launch its attack too early, according to Nature News. But a number of drugs using different viruses and to treat several types of cancer are already in clinical trials. Now that the first virology cancer treatment has been approved, researchers hope that many more are to follow.