A Star Just Got Swallowed By A Warp In Space-Time 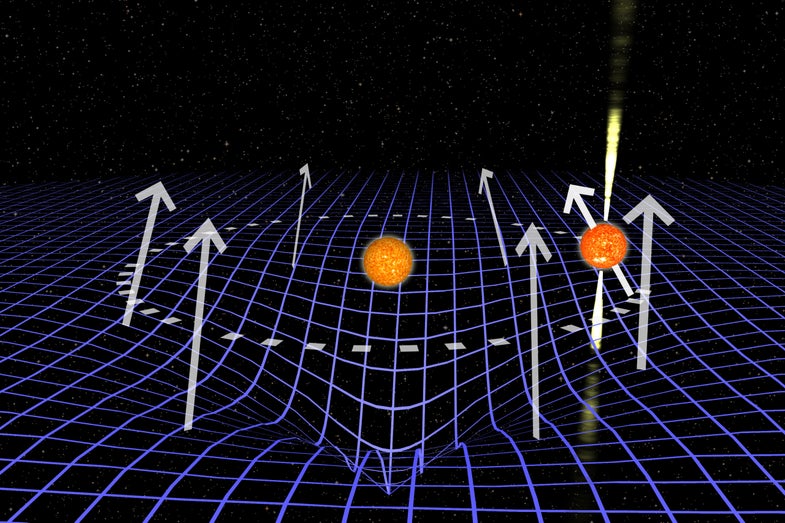 The pulsar, a type of neutron star, creates a warp in spacetime while giving off pulses detectable by radio telescopes, shown in yellow. Netherlands Institute for Radio Astronomy
SHARE

A star has slipped out of view thanks to the space-time warp it creates as it orbits.

The disappearing star is part of a binary star system called J1906. It’s a pulsar, which means it’s a rotating neutron star, the result of a massive star collapsing in on itself. Researchers have been studying the young pulsar for five years to determine what kind of companion star was orbiting around it. That is, until recently, when the pulsar vanished.

As a pulsar rotates, it emits a beam of electromagnetic radiation, sort of like light coming from a lighthouse. Scientists use radio telescopes that pick up on the pulses coming from the star. But as scientists watched J1906, the pulsar began to slip off the radar. It seems that as the pulsar spins around its companion star, the mass of the companion star makes it sink into a dip in space-time, so that its radio waves can no longer reach Earth. The concept is called geodetic precession, which, according to NASA, uses Einstein’s theory of relativity to understand how massive objects like the Earth curve the space around them, influencing the local space-time fabric.

The video above illustrates the sinkhole in space created by the pulsar as it orbits the second star. As the warp increases, the pulsar’s axis shifts (demonstrated by the arrows), so its radio pulses no longer aim toward Earth’s radio telescopes.

But the pulsar won’t be out of sight for forever. Lead scientist Joeri van Leeuwen from the Netherlands Institute for Radio Astronomy estimates the star will come back into sight in less than 160 years.

The team’s findings were released Thursday in the Astrophysical Journal in conjunction with the American Astronomical Society’s 225th meeting.

Correction (1/13/2015, 2:49 p.m. ET): The original story misstated the last name of the study’s lead scientist. It should be Leeuwen and has been corrected. We regret the error.