It looks more arts-and-crafts than aircraft, but could it be the future of commuting? 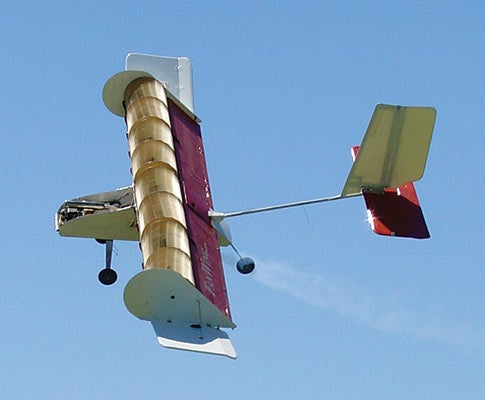 Aeronautical engineers live by the credo “If it looks right,
it flies right.” Luckily, Patrick Peebles is no engineer. He’s a former ice-cream-machine repairman who has built what he calls the FanWing–a conspicuously odd bird whose genealogy lies somewhere between a helicopter and an airplane. It eschews rotor and propeller for a cylinder of horizontal blades that generates exceptionally high lift and safe low-speed performance. It’s the first horizontal-rotor aircraft to sustain controlled flight, which Peebles demonstrated with a radio-controlled prototype last summer at the Farnborough International Airshow in England. Other designs channeled air through ducts and internal fans, which couldn’t generate lift. Peebles’s exposed-fan design requires less power than a helicopter or airplane to achieve similar lift and flight (respectively), and it operates more quietly. Its ability to take off vertically is especially promising, but Peebles still has hurdles to clear. “We’re faced with every aircraft’s challenges: ice, foreign-object damage–including birds–and what happens if the engine shuts down,” he explains. U.S. and U.K. governments are studying the FanWing (fanwing.com) as a possible unmanned aerial vehicle for surveillance and reconnaissance. A manned version, which would cost about $8 million, could be tested in three years.