The maiden voyage of Aquila 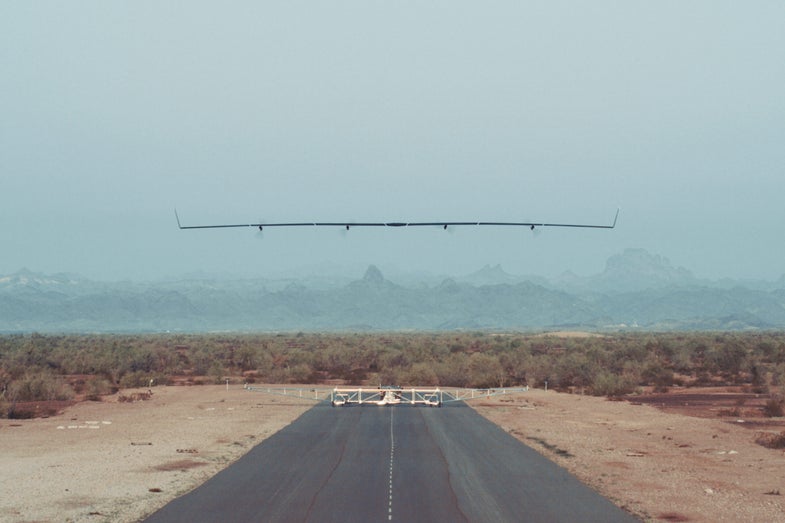 To connect the entire world, Facebook needs the infrastructure to reach people in remote places. Its big idea: a network of drones that beam internet from the sky.

Today, Facebook is announcing their first test flight of its first Aquila drone. It flew for 96 minutes, more than three times longer than Facebook engineers planned.

Aquila is essentially one big wing, spanning 113 feet and weighing less than the average car. The entire drone is run by a computer, which engineers refer to as “autopilot.” For takeoff, Aquila was strapped onto a dolly and hurled down a runway. When the computer sensed that the drone was moving fast enough to take off, the straps were cut, and Aquila reached for the sky.

Aquila isn’t meant to be a speedy drone—its cruising speed is a leisurely 25 mph. That leisure (and the aerodynamic design of the aircraft) cuts back on battery. Aquila used less than 2,000 watts of power during the test flight, a little more than a standard microwave. If the average Californian were paying for the energy used to power Aquila, she would be charged 49 cents, given the flight time and estimated wattage. At its intended cruising altitude, the drone will consume more than twice that, a still-respectable 5,000 watts.

The next goal over the coming months (and years) is to work on making Aquila fly for extended periods of time. That means optimizing the gathering and storage of solar energy, and making sure the autopilot can navigate rough weather conditions.